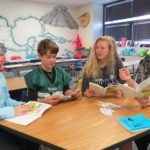 Richter learned last week that her presentation on strategies using novels to build proficiency and introduce grammar in context earned the “Best of West Virginia” award at the WVFLTA conference held Oct. 20-21 in Charleston. Her selection was based upon attendee evaluations and an online vote.

By earning the West Virginia designation, she will travel to Atlanta in March to be a presenter at the Southern Conference on Language Teaching.

Richter said her teaching method has evolved over the last five years to involve a more communicative approach and most recently trying to incorporate mini-novels in kindergarten through eighth grade to teach language. Doing so, she said, helps students learn language in the context of stories as opposed to a strict traditional method of memorizing isolated lists of Spanish vocabulary words.

Because the students are so interested in the Spanish-language novels they are reading, they are basically learning the language without realizing it, according to Richter.

“It’s so natural,” she said. “I’m teaching the Spanish language in the context of stories. The compelling story plots draw the students in. I’m able to negotiate the story with them by asking questions and they communicate in structures and vocabulary they have acquired through the story. I’ve seen students learn more this way in just a few weeks than … over a course of a semester.”

The keynote speaker at this year’s conference was Stephen Krashen, a professor at the University of Southern California. He has written more than 500 publications, and he has delivered more than 300 lectures at universities throughout the United States and Canada. Most memorable for Richter was when Krashen attended her presentation, and complimented it.

“Basically, my hero, the person I owe showing me the most fulfilling way to teach, observed my presentation,” she said. “He told me that he thought I did really well. It was the highlight of my career and my students benefit from his influence in my life.”

Last year, Richter’s colleagues nominated her for West Virginia Foreign Language Teacher of the Year, and at the conference she found out she finished in the top three. Richter teaches Spanish for Warwood students in grades K-8, and also teaches Spanish to students in pre-kindergarten through fifth grade one day per week at West Liberty Elementary School.