Semi Truck Crash Stalls Traffic for Hours on I-70 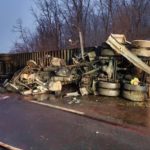 Photo Provided The eastbound lanes of Interstate 70 eastbound near the West Alexander exit in Donegal Township have reopened after this tractor-trailer crashed and caught fire about 3 a.m. today, stalling traffic for hours.

WEST ALEXANDER, Pa. — Morning commuters had a slow go of it today on Interstate 70 east after a tractor trailer crashed and burned near the West Alexander, Pennsylvania exit in Donegal Township.

The tractor trailer crash happened at about 3 a.m. and it was expected to be into this afternoon before the crash scene was cleared up.

Officials said the tractor-trailer was carrying food-grade powdered dye. The truck and trailer became separated in the crash and the trailer caught fire. The driver was taken to a local hospital, according to officials.

Fire crews from Claysville and West Alexander responded along with state police. The cause of the accident is under investigation.

Eastbound traffic on I-70 and I-470 remained at a near standstill at press time, backed up through West Virginia and East Ohio to the scene of the crash. Local police assisted with traffic control on the highway to prevent additional accidents.

The crash happened after ice and snow fell across the Ohio Valley late Thursday and overnight into early today. The weather front that brought ice and about 1 inch of snow to the local area, also dropped 6 to 8 inches of snow from St. Louis into the Northeast, wreaking havoc on some roads.

Meanwhile, snow will not be an issue today as the city of Wheeling prepares for tonight’s Perkins Restaurant & Bakery Fantasy in Lights Parade which will begin at 6:30 p.m. on Market Street in Center Wheeling. The parade will travel north on Market Street to 10th Street, and then travel south on Main Street.

Weather conditions are expected to be free of precipitation at parade time, however the temperature will be in the mid-30s with cloudy skies.

Parade-goers are urged to get to town early. Blankets and hot chocolate may be appropriate to ward off the chill. Motorists are reminded that parking along Market Street will not be permitted after 5 p.m. The Centre Market area will close at 4 p.m. However, 22nd Street will remain open for those who wish to dine in the market area. Main Street from 10th to 23rd streets will close at 6:30 p.m. However, 10th Street will remain one way during the parade to aid in traffic congestion for cars coming from Interstate 70.

Vehicles parked in the restricted areas along the parade route will be towed at the owners’ expense.

Those who are parked or traveling on side streets between Main and Market will not be permitted to leave until the parade concludes at about 8 p.m., police said.