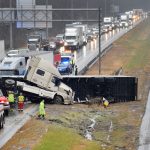 Photo by Scott McCloskey No one was seriously injured following this crash involving a tractor-trailer in the westbound lanes of Interstate 70 on Two-Mile Hill in December.

WHEELING — With an increase in the number of crashes in the Two-Mile Hill section of Interstate 70 in recent years, Ohio County Sheriff Tom Howard said his department and other local officials are looking for ways to make that section of highway as safe as possible.

Howard said he continues to express his concerns and possible solutions with area legislators and West Virginia Division of Highways officials about the stretch of highway between the bottom of Two-Mile Hill and the Dallas Pike/Exit 11 that has seen a severe increase in accidents in recent years. He said while the speed limit, which was lowered from 70 miles per hour to 65 under the term of previous sheriff Pat Butler, continues to be part of discussions, Howard thinks lowering it again is not the solution and could actually cause additional problems.

He thinks if the speed limit is lowered too much, motorists can get to a point where people obeying the speed limit get into collisions with motorists — many times truckers — who will continue to speed along that section.

“That can be an issue in itself, because you got the slow moving traffic and somebody coming around and hitting them. The truckers have a hard time holding back anyway. You will see the breaks catching on fire, the smoke and everything,” Howard said.

Howard said he has talked to DOH officials several times, as he would like to see several changes along that section of highway, including: increased digital signage, leveling out a severely dipped median, and proper placement of useable turn-arounds for deputies to safely patrol.

He said an abundance of proper signage, which can also be easily programmed for road conditions, can only help the situation.

He is quick to point out while his department has responded to more wrecks on the westbound (down hill) side of the interstate, there has been a significant increase in the amount of wrecks on the eastbound side heading up Two-Mile Hill.

Howard said in many instances there continues to be what he refers to as “the frogger effect,” where motorists are hopping back in fourth between lanes to get around truckers and slower motorists in an effort to get off at The Highlands or Dallas Pike exits.

Howard said he has made a suggestion to area officials about looking into making the far left lane on the uphill section of two-mile hill as the slow lane for trucks, and moving the fast lane to the far right side as an option. He said while DOH officials do not agree with him — he believes this option, which he has seen used in other areas of states, may work better for just that stretch of highway. Howard said if the DOH would make this an option, they would have several miles between the top of the hill and the Pennsylvania state line to make a cross-over back to normal.

“That will alleviate a lot of stuff and people dodging in front of trucks. It will take some learning, but it works in other states,” Howard explained.

Other issues of concern Howard has expressed to DOH officials is leveling the grass median, and placing at least two usable turn-arounds between the top and bottom of the hill. He said the current median has too steep of a dip.

“We’ve had discussions about putting better “turn-arounds” along Two-Mile Hill for us to sit, so we can enforce (speed limit) better,” Howard commented. He said currently both turn-arounds in that area are not useable. He said one turn-around is too steep, while the other is much too narrow to safely place a cruiser. “There’s nothing usable,” he added. He said there is one at both ends of the hill, but nothing in the middle — an area he said law enforcement needs to be viable to motorists.

“We’re constantly running it (Two-Mile Hill) anyway, but to have one sitting there running radar will slow them,” he added.

He said he believes the current turn-arounds do not provide a safe situation for his deputies or the public.

In regards to the center median, Howard said he is hopeful the DOH will eventually level it out, as he believes it is too steep. He said the grade of the median can add to causing a vehicle to roll over.

“Cars can flip. It’s real soft. So one of two things happen the cars will either sink a lot of times or they will skid across it like it’s grease and that causes another issue,” Howard explained.

He said they know guardrails will not stop tractor trailers and a “cable system” is not an option because under federal guidelines the hill is too steep for the cable system.

“There’s talks about them (DOH) raising the center,” he said.

Howard said he will continue to talk with area legislators and DOH officials about making some changes along what has become a dangerous section of highway.

“We’re pushing for and trying to get more signage at the top. … That two-mile stretch is probably one of the deadliest in the state, unfortunately we’ve had several fatalities there. We’re involved. We are trying to do stuff and we’re doing enforcement up there the best we can, but it continues to be an ongoing process,” Howard said.