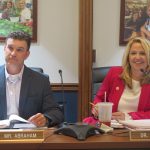 The employees were among 96 of about 800 Ohio County Schools employees who did not qualify for the incentive at the end of the 2018-2019 school year. The incentives cost the district about $1 million each year.

Policy enacted at the start of the school year provides the bonus to employees who do not use all 14 of their allotted sick days during a school year. Past policy had permitted an employee to still receive the bonus if they used all of their sick days for the current school year, but still had more than one sick day banked from previous years.

Board members on Monday unanimously decided to retroactively provide the attendance incentive to the 43 employees granted leave this school year under the Americans With Disabilities Act, the Family and Medical Leave Act or Workers’ Compensation. Board members indicated the exemption under these three acts could become a permanent change to the policy in the future.

“It was an oversight we didn’t envision that was brought to our attention,” board President Zach Abraham said. “We wrestled with the information and decided it was the right thing to do.”

Board member Sarah Koegler said the 43 employees or their family members had legitimate medical needs for which the employees may have banked time. She added that providing them the bonus “seemed the right thing to do.”

“We all agree the policy as written is just wonky — there are a lot of problems with it,” she said. “We need to fix it.”

There was no move by the board Monday, however, to provide the attendance incentive to other employees who had misunderstood the change in the policy. This angered Jerry Ames, who is both president of the Ohio County School Service Personnel Association and vice president of the West Virginia School Service Personnel Association.

“We had people who carried over leave from last year, and they thought that they could use that,” Ames said. “If you are not going to include those people, they’re going to file a mass grievance. I fully support this for the people who are sick … but the people who made a mistake, I think we should have included these people in it.”

Abraham said there is some accountability for individuals to understand the policy.

Ames left the meeting abruptly immediately after the exchange.

“It’s just not fair,” Ames said as he exited.

He returned a few minutes later to retrieve his phone.