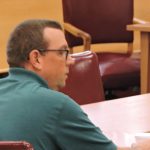 MOUNDSVILLE — Circuit Judge David Hummel refused to sentence a man who entered a guilty plea in Marshall County, saying he felt the prosecution was sloppy with its evidence against him.

Robert “Lewie” Osborne, 41 of Glen Dale, had previously entered a guilty plea to first degree sexual assault, which carries a possible sentence of five-to-25 years in prison. When brought before Hummel Wednesday morning, however, Hummel said he had reviewed the state’s evidence and was not impressed by what he saw.

The evidence in the case indicates that one minor had spoken to West Virginia State Police, whose testimony was recorded.

However, in the process, police also allegedly heard of two other minors in connection with the case, who were named and interviewed, but their interviews were not entered as evidence, at the discretion of the officer who conducted the interviews.

Hummel declined to sentence Osborne, advising that the attorneys review the evidence and return at a later date.

“I understand that everyone thinks this is a slam dunk, because this gentleman made certain statements,” Hummel said. “Nobody in this room, except perhaps the state police officer, knows what those two other girls had to say, that were important enough to say, important enough to record, but not important enough to put forth. Just because (the officer) has an opinion that ‘the child made no disclosures,’ doesn’t mean it’s not valuable to hear what they have to say.

“We do our best to be as thorough as possible, to review everything in earnest, especially when it comes down to someone facing … 25 years in prison,” he said. “I did that yesterday. I found out there was information missing from the totality of the circumstances.”

Hummel dismissed the sentencing hearing after briefly advising Osborne that he was still eligible to contest the case against him.

“I’m sure as hell not sentencing this man for five to 25 years. … In fact, he should have the opportunity to withdraw his guilty plea, based on my knowledge of his constitutional rights,” Hummel said. “This should have been taken, provided, disclosed. It should have, rather than be here wasting everybody’s time and resources, making me look like a (hardliner) because I won’t violate this man’s constitutional rights. I’m not sending this man to prison … without hearing what the victims had to say, both as to his guilt, innocence or anything in mitigation or condemnation.”

Following the hearing, Prosecutor Rhonda Wade said she would wait for a grand jury to indict Osborne in July, rather than trying the case again. Osborne had pleaded guilty on an information, taking a plea which would have seen his minimum sentence reduced from the minimum of 10 years.

“At least two other girls were interviewed to see if they were victims,” Wade said. “They weren’t victims, so we didn’t charge him with them, didn’t ask him to plead to those. We asked him to plead to what he confessed to. … We may have to go another route and indict him in July.”

Osborne was arrested in November after allegedly molesting an 11-year-old girl, who said Osborne had touched her inappropriately in August while she stayed at his residence after school. He is currently free on bond.