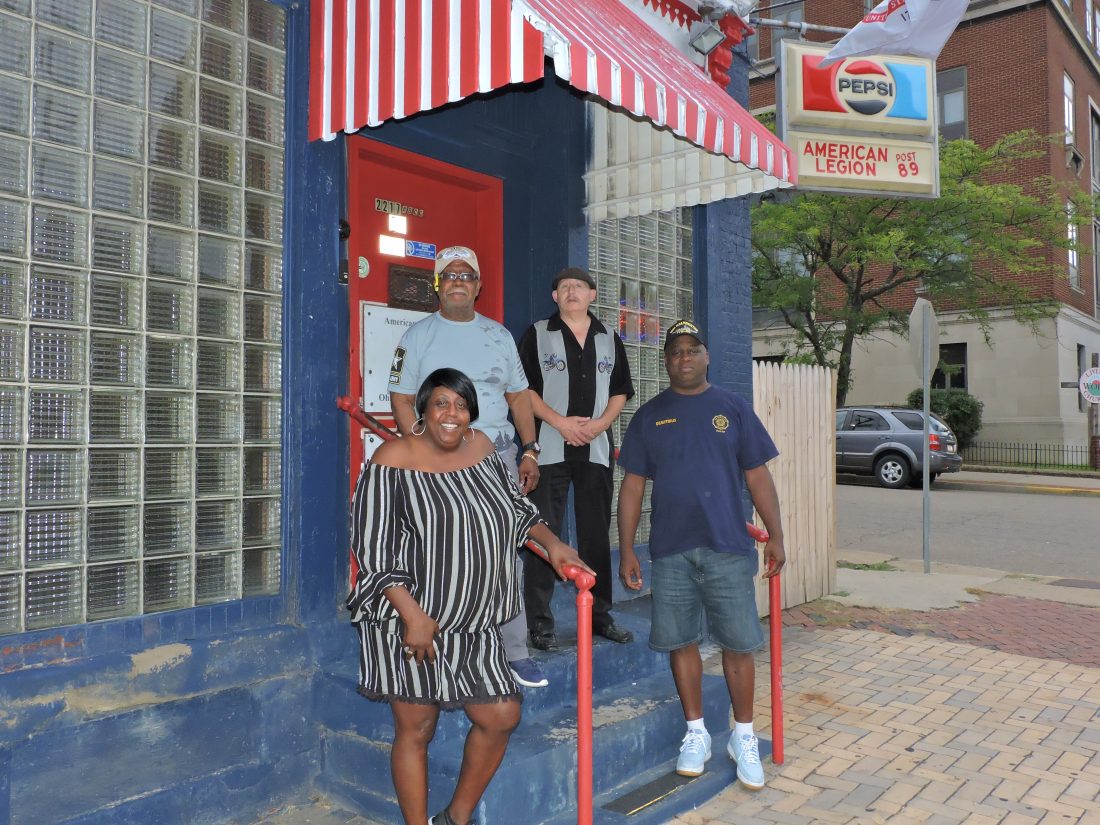 Photo by Heather Ziegler Officials at American Legion Post 89 in Wheeling are shown at the entrance to the club at 15th and Jacob streets. They include from left front Constina Lathan and her husband Post Commander Demetrius Lathon; back row, past commanders Ralph Edwards and Greg Ford.

WHEELING — Just over two years ago, Wheeling city leaders considered shutting down American Legion Post 89 in East Wheeling, tagging it a nuisance. Yet leaders at the Post vowed to make changes to shore up the reputation and accountability of the club.

Today, the club at 15th and Jacob streets is noted more for its barbecued chicken dinners than the crimes and violence once attributed to its clientele.

Since that tumultuous time, Post 89 is back in the hands of the seasoned veterans who initiated policies to clean up the club and its membership. That includes a new manager, stricter rules regarding membership, security, shorter hours and a return to the social club it was meant to be when it was established by the community of black veterans. Post 89 is the only black post in the state and has been touted as the No. 1 Legion in the state, said Post Commander Demetrius Lathon.

“There has not been a police call here in two and half years,” Lathon said last week. “It’s been real quiet here. We’ve made a lot of changes.”

The club is open from 11 a.m. to 11 p.m. Monday through Thursday and Sunday, and 11 a.m. to midnight Fridays and Saturdays.

Lathon said no one gets into the club unless they are members or guests of members. He said guests are vetted and must adhere to the club rules.

The club maintains a list of those people who are barred from entering for a number of reasons.

“We’re not the neighborhood bar. We are a club with new management, security and rules. Being No. 1 in the state speaks volumes for what we have done here,” Lathon commented.

New American Legion rules will go into effect Sept. 1 that allow any veteran to join an American Legion Post. In the past, membership was limited only to veterans who served during wartime or a conflict. Lathon, a 22-year veteran of the U.S. Navy and the Persian Gulf War, said he is happy to see the new rule go into effect. He said he has six veterans who will be eligible to join in September, helping to boost the membership rolls for Post 89.

Lathon is joined in the operations of the facility by his wife, Constina, whom he met while both were serving in the Navy. She said the club had a successful back-to-school family event a week ago with food, school supplies, games and other kid-friendly events.

“The members love our new atmosphere and our chicken,” Constina said. “If there is any problem here, the lights go on and it’s over.”

Lathon said he regularly attends neighborhood meetings and listens to any concerns of the community.

First Vice Commander Ralph Edwards and former commander Greg Ford agreed that all the changes in place at Post 89 have turned the club around for the better.

Ford pointed out the physical changes inside the club, which include new flooring, furnishings and flatscreen televisions that are popular during football season.

“There is unity, good camaraderie here,” Ford said. “We have a core group that is getting a lot of things done. … We go above and beyond in policing our own.”

Edwards said member William Fuller has been instrumental in directing the monetary side of the non-profit club.

“He has stuck by us on the business side. We could not do without him … he pays the bills,” Edwards said.

In past years, there have been a number of violent crimes attributed to patrons of the club, including shootings and a murder. However, Edwards said there has never been a shooting inside the club.

“Now we have security cameras, we can move people along. We don’t allow people to just hang around outside. I’m proud to be a member now. I am not proud of the junk that went on before,” he said.