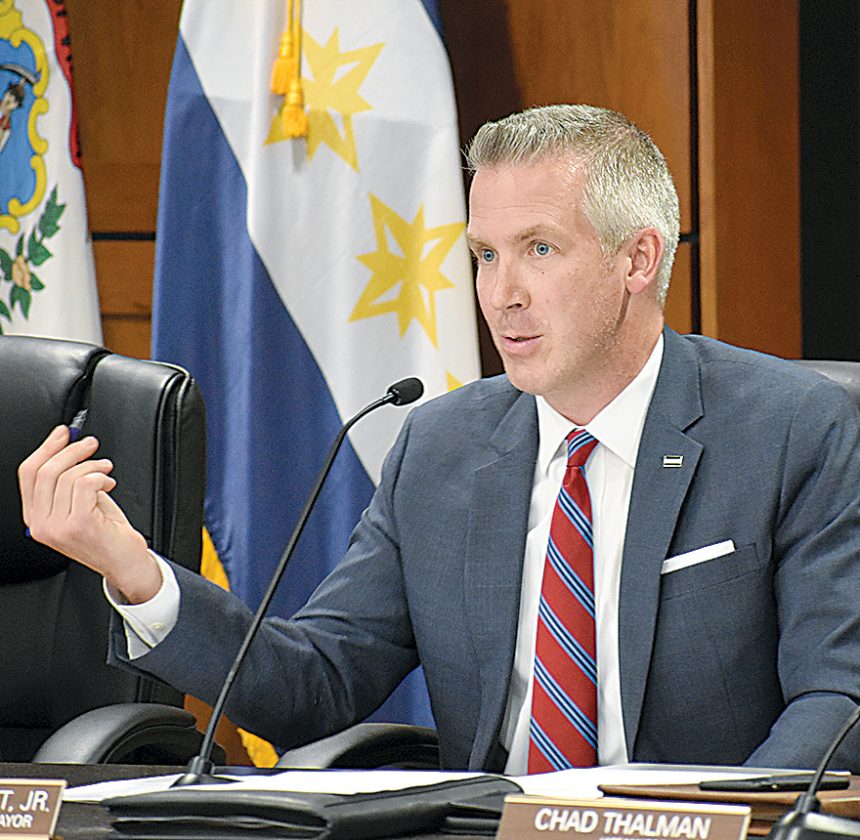 WHEELING — After months of discussion, consideration and opposition, Wheeling City Council opted to enact a user fee on people who work within the city.

Council voted 5-1 to approve an ordinance to adopt the $2 weekly city service fee at its meeting Tuesday evening, with Councilman Ken Imer voting against and Councilwoman Wendy Scatterday absent. Money raised from the fee will go toward a proposed public safety building and infrastructure upgrades.

Council held a public hearing on the matter at the meeting’s start, in which eight residents of Wheeling and nearby towns spoke against enacting the fee.

Residents cited concerns with how the fee would affect minimum-wage, part-time workers and whether council should approve it given the expected loss in jobs from the Ohio Valley Medical Center.

In response, several members of council defended their decision to vote in favor of the fee, which would provide much-needed space for Wheeling’s police and fire departments.

“I’ve struggled with this. I’ve read all the comments and seen all the criticism,” Mayor Glenn Elliott said before the vote on the fee was held. “I certainly respect those who don’t think we should be doing this, but at the same time, I struggle with people who say ‘I support our first responders, but…’ and that ‘but’ isn’t followed by any realistic options moving forward. I think this fee is an imperfect but ultimately fair way to move forward.”

Two other members of council spoke in favor of the fee at the meeting, Melinda Koslik and Dave Palmer. Koslik said she had been undecided on the issue previously and understands the frustrations people have regarding paying the fee, the money from which would be split evenly between public safety and infrastructure.

Koslik cited two main reasons to support the fee: the lack of space that the police and fire departments’ facilities currently have and the critical need for infrastructure upgrades across the city. Palmer agreed with her comments.

“We rely on first responders for safety and they deserve better,” Koslik said.“I know that no one likes to pay more, but the issues I just spoke about are not going to go away.”

Imer, who previously was undecided on the issue, explained why he would vote against the fee.

“I agree about the need for the building. I too have been struggling with this,” Imer said. “Unfortunately, I’m not going to be in agreeance with you guys. I think the timing is just bad. I agree with the people who said no this evening. That’s my opinion in a nutshell.”

Those people listed several complaints and concerns regarding the user fee during the public hearing. Many said the fee would hinder people who work part-time jobs in Wheeling, as it would apply to all full-time, part-time and self-employed workers who work for at least 30 days per year within city limits.

“There are so many people out there with part-time jobs and struggling that are barely making it,” Wheeling resident Connie Cain said. “When do you say enough is enough? We can’t keep taxing people. If you keep taxing us, we’re going to struggle.”

Similarly, Sarah Stupak, who works in downtown Wheeling and lives in Ohio, said the fee would hurt lower-income workers.

“This is basically being built on the backs of the poorest members of the community,” Stupak said. “$104 (per year) is a lot for people who make minimum wage. These people are already struggling and have lower income jobs.”

Elliott said the user fee, based on an ordinance adopted in Charleston, cannot include exemptions for lower incomes based on what West Virginia code stipulates.

“I hate the idea of a user fee being applied to a minimum-wage worker,” Elliott said. “I wish — I’ve spoken with experts on this — there’s really no way around it. Our hands are severely tied. “It’s either another property tax effort or a user fee.

Ed Calvert, who works in Wheeling, recommended that the city hold another vote to fund the public safety building. Last November, a property tax levy to fund the building garnered 54 percent of the vote, failing to meet the 60 percent required to pass in West Virginia.

“The user fee, I believe, is unfair. It includes people who live here and work here, which makes it an income tax,” Calvert said. “The way it’s going to be levied against the working class … I couldn’t take this from working and poor people and give nothing in return. I’m all for the building, I believe in infrastructure spending, but I think if there’s a new building, you should have people vote on it to do it.”

Elliott responded that the West Virginia Supreme Court ruled that user fees are legal and not an income tax on two occasions.

In addition, Wheeling resident Elgine McArdle said she recommended council table the vote given the expected closure of OVMC. Elliott said previously that the closure would result in a loss of 900 jobs in Wheeling. That would be subtracted from an estimated 16,000 to 17,000 jobs in the city.

“I think the city needs to really look at numbers,” McArdle said. “Now is not the time to impose a user fee, which is just another tax in the city of Wheeling.”

Now passed, the user fee will go into effect Jan. 1 and the city will spend the next several months preparing to implement it.

In other matters, council approved spending ordinances for upgrades to the Jenson Playground basketball court and a slip repair on Glenhite Avenue.