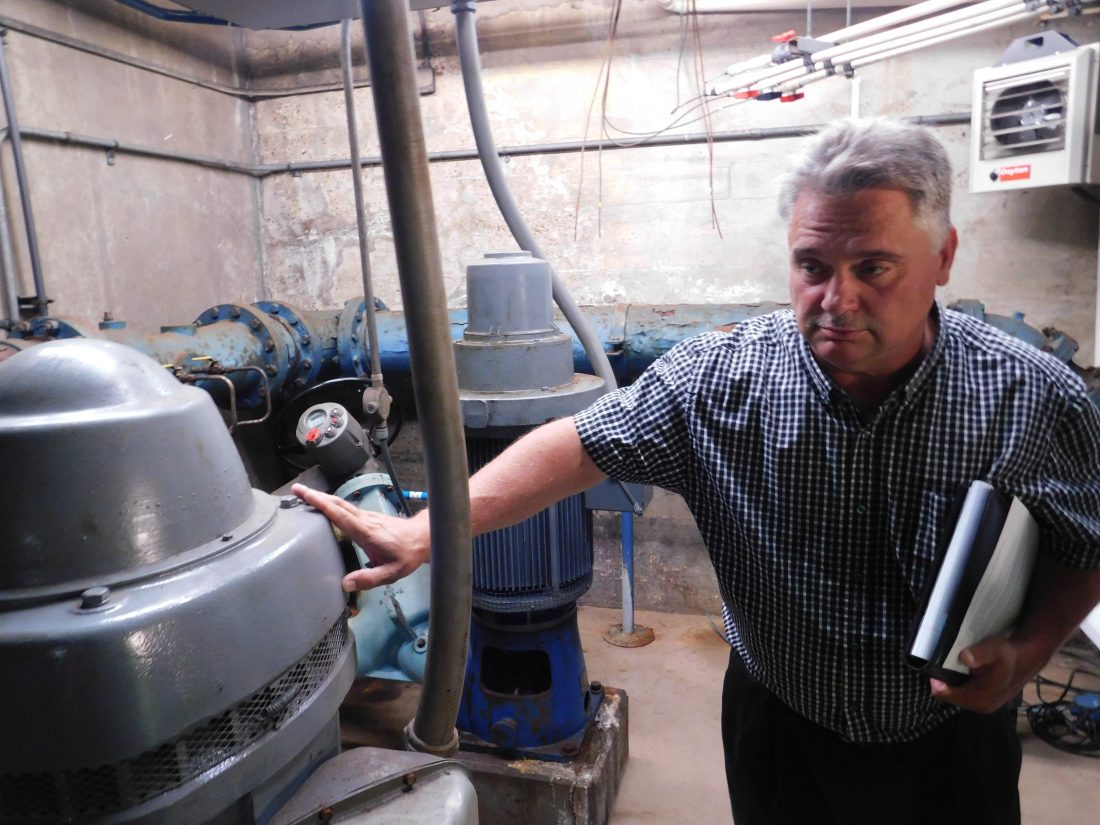 St. Clairsville Safety and Service Director Jim Zucal speaks about the high service pumps at the water plant, saying the pumps required upgrades starting in 2016 to move water at capacity.

ST. CLAIRSVILLE — The fate of water service in St. Clairsville is up for debate with the city considering whether to privatize its water and wastewater system.

A bid from the state-regulated private entity Aqua Ohio has been received and a contract draft is expected to be presented to City Council by early September.

Last week, Safety and Service Director Jim Zucal held a media tour of the plant, pointing out water’s route through the plant and the steps of treating it for the public. He also outlined the city’s work in addressing the failing plant since 2016.

Zucal indicated the infrastructure is crumbling and tanks are leaking into the plant, and the four operators are unable to continue treatment while conducting maintenance.

The interior of the plant seemed a patchwork of old and crumbling infrastructure and new instruments more recently installed. Zucal said during the past three years, St. Clairsville has spent about $300,000 on immediate repairs. He pointed out the feed from St. Clairsville’s reservoir to the plant. In 2016 it was cleaned for the first time since 1928.

“2016 we found that the pipe was partially clogged,” he said. “There was obstruction … then we started working inside the plant to make the operation smoother.”

Other projects to bring the system into compliance with Environmental Protection Agency regulations, including rebuilding the pump that pushes water from the plant into the distribution system, replacing seals in a water pump that was leaking oil into treated water and replacing six hand-operated valves with more modern valves that include flow meters to allow operators to monitor efficiency and help identify the volume of water lost to leaks after it enters the distribution system.

He said the three new rate of flow control valves cost about $100,000 in all.

Zucal also pointed out the pumping system, adding that in 2016 the plant couldn’t get enough water through the pumps.

“We had issues with the pumps, so we used one pump for the filtering process and the other one to push everything out of the system for the constituents,” he said.

“The problem is from the start of the water, raw water which comes out of a reservoir has iron and manganese, has harmful algae blooms. From the time that water comes into the plant ”til it goes out into the system, it’s not adequate and we also don’t have the capacity we really need to grow the city,” he said. “We have great people that are keeping it going. That’s the only reason it’s still going today.”

Outside the plant, he indicated the carbon lagoons and clear wells are full of sediment.

“What’s underneath us is finished water. When this goes out to our community, we have to be careful. We can’t have anything here that could go into that water system,” he said. “Anything that comes through this earth can technically get into the water system. We have to be very cautious because of its age. … I think this should be an eye-opener.”

He added that a storage building is located above the tank that holds treated water awaiting distribution, and the vulnerability is unknown.

“Things could happen, so the EPA wants that resolved, too,” he said.

Zucal added there is very little electronic monitoring of the treatment process. It would cost $1 million to $2 million to bring the storage and instrumentation up to date he said.

He also said the water testing lab is also outdated and needs to be modernized for greater accuracy. He added that the network of waterlines throughout the city will cost $7 million to replace pipes that are too small to provide adequate water flow for modern fire protection standards. It will cost still more to completely address common taste, odor and discoloration complaints.

Zucal said it would cost between $20 million and $25 million to update the water plant, replace undersized water mains and improve storage and instrumentation. He added that the city is carrying $3.5 million in debt for past water and sewer projects.

“It comes down to one word: capital,” Zucal said. “The lifespan for this plant is really not three years unless it gets significant funding, and that would just be a bandage.”

In answer to some questions after the tour, Zucal said he could not predict if Aqua Ohio will build a new treatment plant.

“I don’t think the option’s really out to keep the plant. There’s other options out there. The problem with the plant is the age of the plant and the cost to build a new plant, and regardless we still have a surface water source,” he said, adding that communities are better off with well fields, such as those used by Wheeling, Martins Ferry and Belmont County. “We don’t really have a great water source, so I think the idea would be to keep this plant going and in the meantime (explore blending water).”

He pointed out the 12-inch feed that allows the city to obtain water from the county, although blending would cause turbidity and that would call for an engineering project to allow the water to settle before moving on. The current contract with the county allows the city to purchase 285,000 gallons daily. He said if the city undertook construction of a new plant, the engineering and design phase, acquisition of funding and bidding would likely take several years before any work begins.

“In the meantime, we struggle, and at the end of the day we still have a surface plant,” he said. “It’s a source problem, it’s a mechanical problem, it’s a distribution problem, and I think the people of St. Clairsville deserve better.”

He said the city has seen numerous waterline breaks in recent weeks. There are 10 miles of 4-inch distribution pipe in the city, and 95 additional acres east of the city have recently been annexed for the St. Clair Commons senior housing development and for further growth. This addition includes a new water tank.

“From one side of the city to the other side of the city, so we have a dynamic issue here. We’ve taken on the expense of trying to get that area developed for economic development,” he said.

Zucal said the water plant produces 600,000 gallons of water daily, with about 30 percent lost to leaks.

“The needs of the city for the future, we anticipate are about a million gallons. This plant is near capacity for production,” he said.