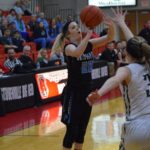 With upset victories at Beallsville and Shadyside to advance to the Division IV Eastern District Tournament already recorded, the Bulldogs’ late-season surge, which saw them win nine of their last 10 entering Wednesday’s game, came to a halt at the hands of Malvern (20-5), 39-34 inside Steubenville High School’s Crimson Center.

“We gave it a heckuva shot and (the outcome) definitely wasn’t because of lack of effort, grit or determination,” a disappointed Greg Harkness said. “Some of the shots that have fallen for us in the last two games just didn’t go down.”

Indeed. Bridgeport, which trailed by four after one, five at halftime and eight after three, struggled offensively, but the Bulldogs made up for that on the defensive end where they made Malvern, which dispatched River in the sectional co-final last week, work extremely hard for everything.

Similar to the Bulldogs’ tourney opener at Beallsville, they found themselves on their heels at points. Malvern stretched the lead to as many as 10 early in the fourth quarter at 29-19. That’s when those character traits that aren’t practiced intervened for the Bulldogs.

“The heart and pride that these kids have is something no one can question,” Harkness said. “I knew we’d come up here and leave it all on the court. We did, but it wasn’t quite good enough.”

Bridgeport proceeded to use its defense to predicate its offense and reeled off a 9-1 run to make it a 30-28 reading. As she’s done so many times, senior ace Marissa Beal drilled a triple to ignite the spurt and Angela Sommer got field goals on back-to-back trips.

The Hornets — on top of being careless with the ball at times — obliged Bridgeport by struggling to knock down foul shots. In the fourth quarter, the Carroll County squad was 8 of 15.

Bridgeport got within one when senior Lauren Neer buried a bonus goal to make it 32-31.

West Liberty-bound Kelsey Hulit, however, answered with two of her game-high 17. Senior Kamden Dulesky was fouled in the act and converted one-of-two for Bridgeport, making it a 34-32 reading.

However, the Hornets proceeded to score the next four and the Bulldogs — as they had basically all evening — were back to fighting up hill with time no longer on their side.

“We told the girls that in the tournament you have to earn every win and Bridgeport definitely made us earn it,” a relieved Malvern coach Jason Powers said. “They battled hard. That’s what Cinderella does and you have to give credit to them for that. They just wouldn’t let us get away from them.”

While Malvern will prepare for a date with Shenandoah on Saturday at Cambridge High School with a trip to the regional on the line, Bridgeport, which closes the season at 11-14, will bid farewell to four seniors. Beal, Dulesky, Neer and Shelby Matheny, who turned in another workmanlike effort on the interior, will all collect diplomas in a few months.

“I can’t say enough about those four seniors and the part that hurts me the most is we don’t get to go back in the gym tomorrow or any other day and see those four kids,” Harkness said fighting back emotion. “They’ve given everything they had to this program for four years and to me, personally, for two years. They’ll always hold a special place in my heart.”

Beal led the Bulldogs with 11 points, while Neer finished with six.

BYESVILLE–Garaway outscored Bellaire 35-17 in the first half en route to a win in the Division III District finals at Meadowbrook.