Roughriders March On To Championship 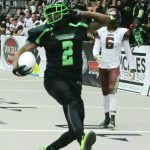 Photo by Joe Lovell Roughriders’ wide receiver Larry Beavers Jr. high steps into the end zone for a touchdown as West Virginia defeated West Michigan on Saturday night inside WesBanco Arena to advance to the championship.

WHEELING — West Virginia will play for the American Arena League indoor football championship, mainly because of the play of the only two local players on the team.

However, it is still unclear as to where that contest will be played, according to West Virginia owner Gregg Fornari.

Bridgeport’s Cole Smelley, who played a year at Muskingum University after an all-state high school career, and Weirton Madonna’s Connor Arlia, who split his collegiate playing time between West Virginia University and Kent State, stood out on each side of the football, respectively.

Smelley, who has been the leader of the Roughriders’ top-rated defense as an under-sized linebacker, had an outstanding game. He was charted with four quarterback sacks, five tackles and a pair of quarterback pressures.

“It can’t get better than this. We were fortunate enough to play all but two of our games in front of our home fans and feed off of them,” Smelley said. “It just keeps getting better every week.

“We know we belong here,” he said of the championship game. “We put in the hard work in practice every week and we know we will win if we play our game.

“The offense has been getting better and better every week. They work against us every day in practice and it makes us both better units. We help each other out. It’s exciting. When we play our best and they (the offense) play its best, I don’t think anyone can beat us.”

Arlia, who finished with five receptions for 67 yards, opened the scoring when he landed a 12-yard pass from Jarrett Brown to complete the first possession of the game. He also caught TD strikes in the second quarter (28 yds.) and fourth quarter (4 yds.).

“I think I have to go back to high school for a game in which I caught three touchdowns,” Arlia recalled while signing autographs. “But it was a total team effort. Everyone blocked great and J.B. (Jarrett Brown) was unbelievable with his scrambling abilities (Saturday).”

Faced with a third-and-22 from his own 28, Brown shedded tacklers like a cat does hair in the summer before finding Arlia all alone in the right corner of the end zone.

“That was all J.B. You learn scramble drills when you’re a little kid playing. Quarterback says never give up on a play. That’s what I did and he found me.”

Brown teamed with Larry Beavers Jr. from 19-yards out for the only score of the third quarter. It was Brown’s season-high sixth TD strike of the game.

“I threw for six in high school one time,” Brown said with a chuckle.

West Virginia set the tone on the first drive of the game.

“That’s what we wanted to do. Whenever we get the ball first we want to come out firing. We got off to a good start,” Brown said. “We were clicking. We were executing. We played at a good tempo and got everyone involved.”

Brown was a very efficient 16 of 24 for 199 yards and just one interception. Beavers Jr. caught nine passes for 122 yards and two scores. Devine had a pair for 32 stripes and Chad Walcott also had two catches for 25 yards.

The defense, with Ellis Lankster, another former WVU product, and Jamie Bender each picking off a pair of passes, held the Ironmen to 53 yards of total offense, including negative 22 on nine carries.

∫ According to a West Michigan assistant coach, starting quarterback Alex Carder did not make the trip due to a business trip. He passed for 8,886 yards in two-and-a-half seasons at Western Michigan University.