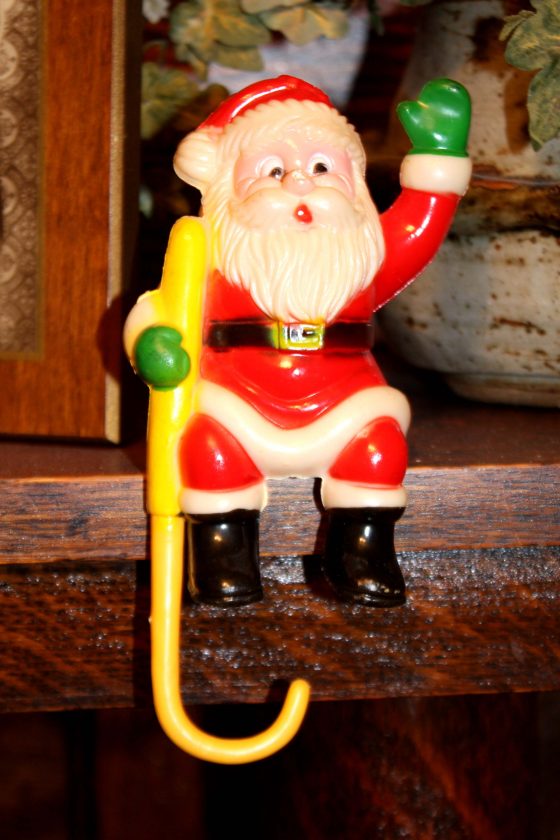 Shown is a celluloid example of Santa. It is perfect on a mantle edge and may have been created to hold a stocking.

What’s your favorite holiday collectible? Mine is definitely Santa.

Santa is the theme in my hall and front room every Christmas. I have a variety of ornaments and statues that illustrate the jolly gift giver, some old, others new.

There is a small collection of ceramic Santa mugs that I bring out every December that brightens my entry, since I line them up on a prominent ledge. These cups were popular in the mid-20th century but versions are still made and available today (I saw one at JC Penney at The Highlands just the other day.)

The Victorians are credited with making Christmas what it is today in the United States. They made it a big gift giving celebration and expanded it commercially. Many of our beloved traditions, like the Christmas tree, date to this era.

Santa Claus and his image has changed more than you might imagine over time and from culture to culture.

The jolly one can be traced back all the way to the fourth century and the bishop of Myra in Asia Minor, now known as Saint Nicholas. This generous and religious man became legendary for his kindness and gift giving. Possessing miraculous powers, his legend grew during the Middle Ages as Christian pilgrims traveled to his shrine in Italy. These religious pilgrims took the legend of Saint Nicholas back to their homes across Europe and Asia and the story of Saint Nicholas grew.

Saint Nicholas’ Feast Day became a day of gift giving and charity and was just celebrated on Dec. 6.

Dutch colonists brought their Sinterklaas to America in the 17th century and the image of the bishop gradually evolved into that of a jolly old elf like we think of today. But it didn’t happen overnight.

Clement C. Moore and Thomas Nast get credit for the final transformation of a stern bishop saint into the jolly elf figure of modern times.

Moore with his “Night Before Christmas” poem, written for his children in 1822 and Nast, with his illustration for Harper’s Weekly in 1886, created the popular image of the legendary gift-giver.

Germany’s Santa is often referred to as Belsnickle and represents the companion of the good St. Nicholas on Christmas Eve.

An elfish old man, the Belsnickle could be the bearer of good or bad news depending on the behavior of the children since he brought sugarplums to good children and switches to bad ones. Collectors snap these antique figurines up in a variety of colors, brown, blue, yellow and red. Celluloid and plastic Santas also are charming and I have a few of these. I keep a lit up plastic version on my newel post, so it’s the first thing visitor see when entering my hall.

Celluloid preceded plastic as a material for toys and decorations and is delicate and light to touch so it’s amazing that these old Santas survived but sometimes they do.

Even in this cynical age, it’s reassuring to know that Santa remains firmly in his role of amazing giver and saint. I hope he’s good to you this year.

For comments or suggestions on local treasures to be featured in Antique of the Week, Maureen Zambito can be reached via email at zambitomaureen@hotmail.com

DEAR ABBY: My mother is in a locked ward of a nursing home because she has Alzheimer’s and is a flight risk. My ...

Dear Readers: Today’s SOUND OFF is about the unrealistic expectations placed on women. — Heloise “Dear ...

DEAR ABBY: My husband and I have been married for eight years. He has always been independent. He works full time ...

A leading light in the fight to save Wheeling’s most historic structures has been extinguished. Dr. Emory Kemp ...

DEAR ABBY: I have been married for 37 years. During that time, my husband has cheated on me and fathered several ...

One in five young people are trying to cope with a mental health condition, according to teenmentalhealth.org. ...