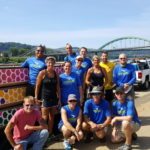 Fifteen one-hundredths of a second was all that separated first and second place at the second annual King’s Daughters Dragon Boat Race held at Heritage Port on Aug. 27. According to King’s Daughters executive director Jamie Remp, 25 teams and more than 500 people participated in this event. After three heats and 62 total races, it was OV Crossfit Black edging out Hoorah for Heroes and Tipsy Canoe for the win.

Dragon Boat racing was new to the Ohio Valley last summer but has caught on quickly with a 25 percent increase in teams, Remp said. Soon after becoming the executive director, Remp knew she needed to make a splash and try something different for fundraising.

“While I love many of the fundraisers I attend with my husband and friends, I wanted to bring something new and exciting to the area,” she said before the opening race on Saturday. And Dragon Boat racing is just that.

Each race consists of three traditional Hong Kong-style 46-foot dragon boats with 20 paddlers, one steerer and a drummer, each racing 250 meters upstream at Wheeling’s Heritage Port. Because a specific stroke is used, race officials arrive in town on Tuesday evening to conduct three nights of practices to train each team with the proper technique.

“What a great and unique event! It’s our second year participating and sponsoring, and we can’t wait for 2017,” said Will Turani, director of Global Operations for Orrick, and dragon boat racer.

Dynamic Dragon Boat Racing, a company headquartered in Knoxville, Tenn., supplies six boats, the necessary equipment and steerers (or coaches) for the week. In 10 years in business, they have coordinate races generating more than $3.5 million for nonprofit organizations across the country. According to Remp, they have raised more than $40,000 for their center.

King’s Daughters Child Care Center was established in 1897 to provide child care to the tobacco and textile industries, Wheeling’s main employers at the time. Over the years, they have cared for thousands of area children and continue to do so at their location on 13th Street in East Wheeling. Last year, a major renovation was done to upgrade and expand their kitchen. The race has helped greatly in making that kitchen a reality.