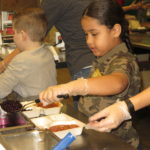 Seven-year-old Israel carefully scoops blueberries into a tray that later was delivered to a someone in need through the Catholic Neighborhood Center in Wheeling.

On a recent Wednesday morning, three young boys attended to their tasks of straightening, flattening and stacking plastic grocery sacks at the Catholic Neighborhood Center on 18th Street in Wheeling.

Ages 7-9, each was accompanied by a therapist who never left his side. One of the boys chattered constantly in a language seemingly all his own and sometimes emitted a whoop or a squeal. One occasionally got distracted throwing bags up so they filled with air. The third might have crumpled a bag here and there before being reminded to smooth it out.

But after a whole hour of bag duty, these worker bees were ready to move on to their next task, the meal line, where they spent the next hour scooping, sealing and bagging meals that would be delivered to about 180 homebound people.

The boys are students at Augusta Levy Learning Center in Wheeling, where they receive therapies that help them to learn, function and navigate their way through life with autism.

In October, 9-year-old Lincoln, 8-year-old Aidan and 7-year-old Israel “Izzy” started a pilot program for pre-adolescents who are not yet ready for the transition to a typical public school.

Every Wednesday, the three boys board a public bus outside the center in North Wheeling, hand the driver their money and sit in the same seats each as they trundle through town to the East Wheeling neighborhood center operated by Catholic Charities of West        Virginia.

They spend two hours working there before taking another bus to a grocery store, where they get to pick out whatever food they want to buy with the few dollars their parents put in their backpacks that morning. For Lincoln, that usually means chips. For Aidan, who has severe food allergies, it’s a banana or grapes. Then, they go out to eat with their therapists, where they practice restaurant etiquette before heading back to the center for more lessons in independence, such as making beds, emptying the dishwasher and collecting the day’s trash.

“The whole program is focused around quality of life and giving them the absolute most independence we can give them,” said Kasey Tanner, program director, who supervises the boys and therapists –Haley Rush, Katelyn McGowan and Megan McGee — each Wednesday.

“When I passed my boards, I told Kathy my dream is to work with older kids,” Tanner said. Shapell OK’d Tanner’s well-researched proposal.

“We kept receiving calls from a lot of parents in the community asking for services for this age group, so we knew there was a need for it. The timing was just right to give it a try,” Shapell said.

Because it’s a pilot program, only three boys are enrolled for this first year. Two of the boys, Lincoln and Aidan, have been at the center for about five years.

Lincoln’s father, Jim Stephens of Moundsville, said while other children with autism have transitioned to typical public schools by age 7, 8 or 9, “in (Lincoln’s) specific circumstance, it didn’t make sense to us,” referring to himself and Lincoln’s mother, Lisa Robinson of Proctor.

Seeing Lincoln’s growth since October confirmed the decision to stay at Augusta Levy, Stephens said. He took the day before Thanksgiving off from his Pittsburgh job to see Lincoln in action at the 18th Street center. While he tends to be more reserved in public, Lincoln clearly was enjoying himself while completing his tasks.

“To see him in the community taking that responsibility and seeing how he interacted with the public was surprising,” Stephens said.

“They have absolutely exceeded our expectations,” Tanner said, noting she recently watched a video from October. “At first, Lincoln wouldn’t even pick up a bag. He would not do anything with it,” and Aidan “wanted to grab all the bread and smush it.”

Aidan’s mom, Patty Patrick of Wheeling, said she also visited the boys at “work” and found it “heartwarming” to see Aidan perfecting his skills.

“It’s been a wonderful experience to watch him flourish,” she said.

On the meal line, it’s Izzy’s job to fill one tray receptacle with whatever is on the menu that day. Then Lincoln helps operate the contraption that seals the tray with plastic wrap, while Aidan places fruit or dessert in a bag. It’s rote work, but repetition is nothing new to anyone with autism. The therapists worked with the boys attention spans prior to October to prepare them, offering rewards for sitting still or working at a task for a minute at a time.

When they first arrived at the neighborhood center, Tanner said she wasn’t sure exactly what they would be doing.

“We just kind of came and put them in different spots to see what they could do,” Tanner said.

Grant Coleman, program assistant who coordinates the center’s 150-170 weekly volunteers, said the partnership with Augusta Levy is a valuable one.

“Wednesday mornings were probably one of the hardest spots to fill during the week, so they filled a need for us. We need about six volunteers to have a full (serving) line. They fill half of those spots every week. And they do an excellent job, too,” Coleman said.

Kitchen manager Betty Simeth echoed: “They picked up a lot of good slack. We were short on our Wednesdays. They love it, and they really enjoy doing it and we enjoy having them here.”

At first, she feared the work wouldn’t get done, but she added: “It’s amazed me; it really has.”

Not only are the boys getting experience out in the community, but they are ambassadors for autism and Augusta Levy. Coleman said their interactions with other volunteers and some of the center’s clients have been positive.

“It’s really cool to see them interacting with our staff and how everybody joins together to make a really good time of unique individuals,” Coleman said.

Shapell said “the most exciting piece” of the whole program is that the kids are serving the community.

“So many people help our kids, I think it’s a really powerful thing to have them contributing to the community in return.”

Added Aidan’s mother, Patrick: “It’s great to be able to give back to the community and at the same time be able to give the kids the skills they need to use in life. … Overall, it’s just been a wonderful experience for him, and we’re excited to see where this takes him in the future.”