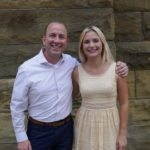 WHEELING — The 2017 Dancing With the Ohio Valley Stars lineup will make patrons want to run, not waltz, to get tickets, which are on sale at WesBanco Arena box office or online at www.augustalevy.org. The show will take place at 7 p.m. Nov. 4 at the Capitol Theatre. A pre-party with food catered by Ye Olde Alpha and entertainment by Tim Ullom and Jason Treuman will begin at 5 p.m. in the Capitol ballroom.

This year’s all-star lineup of celebrities and their dance partners includes:

— Jon-Erik Gilot, director of archives and records for the Diocese of Wheeling-Charleston, dancing with Taylor Lucas from Take a Bow Dance Centre

Modeled on ABC’s “Dancing With the Stars,” each couple will perform a ballroom dance of their choice to be judged by a panel of three judges. The winners receive a large mirror ball trophy.

Co-hosting this year’s event will be WTRF’s Laurie Conway and David Blomquist from the Bloomdaddy Experience radio show.

Tickets for the show are available at the door beginning at 6 p.m.

Reservations are required for the pre-party. Tickets may be purchased by calling 304-242-6722 through Nov. 3.

Augusta Levy Learning Center is the first and largest research-based treatment center in West Virginia. ALLC employs methods pioneered by Dr. O. Ivar Lovaas of University of California-Los Angeles. His model of applied behavior analysis (ABA) is based on 40 years of research and is backed by peer-reviewed studies showing at least 50 percent of children with autism who receive this intensive treatment become indistinguishable from other children on tests of cognitive and social skills by the time they complete first grade.

ALLC’s results speak for themselves: The center’s students typically graduate to return to their local schools, many with no need for further special education. Two-thirds of the graduates have been able to attend regular classrooms.