‘Authors in the Cellar’ Returns to First State Capitol

WHEELING — The Wheeling Academy of Law and Science Foundation, in connection with the Reuther-Wheeling Library and Labor History Archive, will host a revival of the “Authors in the Cellar” program at First State Capitol, 1413 Eoff St., at 6 p.m. Friday.

The free event will feature complimentary light refreshments and will be held in the State Cellar, a former restaurant on the premises of the First State Capitol.

Speaking at the event will be the acclaimed West Virginia essayist Catherine Venable Moore, who wrote the introduction for the new edition of Muriel Rukeyser’s “The Book of the Dead,” a collection of poems about the 1931 Hawk’s Nest Tunnel Disaster being published by WVU Press. West Virginia Poet Laureate Marc Harshman of Wheeling will be on hand to read a selection of poems from the book.

A writer and radio producer, Moore grew up in Charleston and studied writing at Harvard University and the University of Montana. She returned home to West Virginia to work as a newspaper reporter and independent producer. Her current projects include works of narrative nonfiction set in Appalachia, to be published by Random House.

She has co-founded several public history projects, including the Paint Creek Audio History Project, Cedar Grove documentary project and the West Virginia Mine Wars Museum. Local 1440 of the United Mine Workers of America inducted her as an honorary member for her work to preserve the history of the organization.

Moore’s talk at “Authors in the Cellar” will focus on her introduction to Rukeyser’s book about the 1931 disaster in Gauley Bridge, W.Va. “The Book of the Dead” is a collection of poems investigating the roots of a tragedy that killed hundreds of workers, most of them African American.

WVU Press is publishing a new edition of the book featuring, for the first time, the photography of Nancy Naumburg, who accompanied Rukeyser to Gauley Bridge in 1936. Copies of the new edition will be available for purchase at a discount from the suggested retail price. 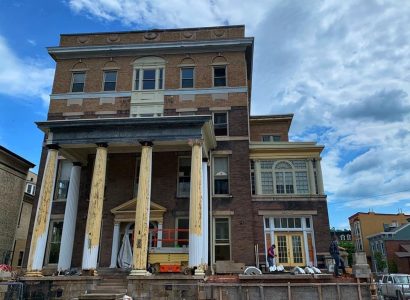