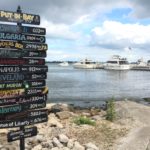 Photo Provided Put-In-Bay, Ohio, an island in Lake Erie, serves as a popular relaxing resort location and a great place to unplug and unwind.

Many people may live for the next notification on their phones, but for others, being constantly attached to their electronic devices can be a hassle. When a plugged-in existence calls for a getaway, there are options for doing so both in town and out.

For a quieter moment around Wheeling, the Ohio County Public Library offers its Lunch With Books, a weekly program during which presenters discuss a variety of topics in the library’s auditorium. These include presentations on books by local authors, film screenings and conversations, and live music demonstrations.

Eric Rothenbuehler, who works for the library’s archives and reference departments, said many people see the weekly programs as a means to meet and talk with the community.

The program averages about 70 people per event, but may vary on the particular topic being discussed.

For those looking for a more remote getaway from the grind, Uniglobe Ohio Valley Travel offers numerous destinations to leave the area. One that stands out to Uniglobe representative Jennifer Elias is Put-In-Bay, Ohio. She has been to the island herself and said it proved to be relaxing and a solid diversion from the daily routine.

“A weekend at Put-In-Bay, you’re driving a golf cart around the island, visiting the lighthouse, kayaking, that kind of thing; you’re not going to be on your phone,” she said.

Put-In-Bay, in Lake Erie east of Cleveland, is a destination trip that boasts several sightseeing attractions, from lighthouses to wineries, as well as historic locations and the Crystal Cave, home to the world’s largest geode.

“If you want to be adventurous you can kayak; there’s parasailing, or you could sit on the beach and stare at the lake, or just drive around. There’s so many little back roads,” she said. “There’s so many different bars. … For me, it was something that I didn’t expect. I expected it to be just a little island. But being able to drive around at your own ease, be disconnected, and be ‘stuck’ on the island, so to speak, I’m not going to get off the island for the next two days. I’m going to enjoy it while I can.”

Other local outdoor retreats closter to home include Big Bear Lake in Preston County, W.Va., and Senecaville Lake in Guernsey and Noble counties, Ohio. Outdoor camping trips to both locations are common, and for some, the remote destination may provide an added impetus to get off their phones. Big Bear Lake, at least, is outside cell service for many providers.

Moundsville resident Allyson Hill has gone to Big Bear Campgrounds for several years with friends and family, and when not taking the time to swim, sunbathe or chat with her companions, she took the time to get closer with nature — and her camera.

“Mostly what I did is nature walks, took my camera and got some pictures of nature,” Hill said.