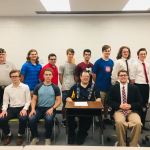 The 82nd annual American Legion Mountaineer Boys State will take 21 teens from the local area to West Virginia University’s Jacksons’ Mill on June 9-15. The American Legion Mountaineer Boys State is an honors, leadership and citizenship academy which has existed since 1936 to teach “good government through participation” to the outstanding male high school juniors. During their one-week academy at Jackson’s Mill, the teens will learn the workings of government, run for “office” and realize the challenges of running a government

∫ Dillion Ziolkowski, from the Gunnery Prep Academy in Connecticut.

While the cost to attend is $250 per youth, local program director for Mountaineer Boys State, Marine veteran John Nanny, said he was fortunate to have enough sponsors to pay for all 21 teens to attend at no cost to their families. Transportation, lodging and meals are paid through generous sponsors, Nanny said. He said the sponsors’ generosity also afforded him the opportunity to give back funds donated by the American Legion Post.

To qualify for Boys State, you must be a male entering his junior year of high school, have a 2.75 or higher grade point average, have demonstrated outstanding qualities in the area of school activities, community activities and character. Each participant must not have attended a previous Boys State and must be a citizen of West Virginia or attend a high school in West Virginia.

This year, one student who will be attending is enrolled in a prep acadamy out of state, but is a resident of Wheeling. The teen was permitted to take part because he meets all of the requirements.

Participants from the Northern Panhandle represent District 1 for Boys State under the direction of Jim David and Gary Wolfe.