Medovic Represents West Virginia As Mother of the Year 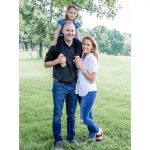 WHEELING — Brady Medovic is a friend, daughter, sister, aunt, wife and mother. She knows the pain of loss and the joy of birth. The 34-year-old Wheeling resident is also an advocate for celebrating and honoring the lives of women everywhere.

Medovic is a community development manager for the American Cancer Society. Her name has been synonymous with Relay For Life, especially since losing her sister Erin Jo Brookes to cancer in 2009. Medovic’s work with Relay For Life caught the attention of a woman in Alabama who was a former American Mothers Mother of the Year.

American Mothers is a non-profit agency started by Eleanor Roosevelt and JC Penney to honor working and stay-at-home moms who are making a difference in their communities throughout the country. The organization has been in place for 84 years. Every year since its inception, American Mothers has named an inspirational mother from nominees across the 50 states, District of Columbia and the Commonwealth of Puerto Rico for this important honor.

Medovic said she was surprised and honored. She and her husband Ty, a physician’s assistant with MedExpress, have a 4-year-old daughter, Peyton. They are expecting their second child on Halloween.

As the Mother of the Year from West Virginia, Medovic was invited to Washington, D.C. to meet the other winners and learn more about the workings of American Mothers.

The family, including her parents Debbie and Brian Brookes, and her in-laws, Tammy and Tom Medovic all of Wheeling, made the trip to D.C. There, Medovic also had an opportunity to visit with U.S. Sen. Shelley Capito, R-W.Va.

“I learned how the mothers raise awareness about women in the country. Back when it was started, moms weren’t honored for all they do. … I was thinking I wasn’t doing anything to be honored but they teach you that you are worthy,” she said.

A graduate of Wheeling Park High School and West Virginia University, Medovic said her involvement with American Mothers has raised her own awareness of the important roles women have in this country. And she knows motherhood is one of the toughest jobs they experience.

“We have many jobs, whether working outside the home or stay-at-home moms, none of it’s easy. In a strong community of women and men, we can make a difference. We shouldn’t let labels and titles hold us back,” said the mom who is passionate about her family and work.

In her job with the American Cancer Society, Medovic coaches Relay For Life volunteers. “It’s my passion. I first started with Relay because I didn’t want my sister Erin’s passing to end at that … I wanted to keep her memory alive,” Medovic explained.

Erin died after battling cervical cancer. Medovic said she works to find a cure for cancer through the fundraising efforts of Relay for Life events and the American Cancer Society.

“It was so hard when Erin passed and I saw what my parents went through. And now that I’m a parent … I don’t want others to go through this,” she added.

Debbie Brookes said she was very proud of her daughter and all her children. She said she enjoyed attending some of the sessions where the mothers told their stories.

“I am so proud of Brady. I give all my kids so much credit … they do things I wouldn’t have had the courage to do even in my 30s,” Brookes said.

Brookes remarked that hearing some of the other Mothers of the Year tell their stories was eye opening. She said some of the women had sad stories of their childhood, of poverty and parents on drugs, but that they also learned from those experiences how to be better parents toward their own children.

She said the American Mothers organization gives a voice to women, offers positive programs, and she hopes more people take note of what they do.

The American Mothers aid women through grants and provides opportunities for the honorees to deliver talks to other about those things for which they are passionate. Some of the mothers have appeared on television talk shows and at speaking engagements to promote women and family issues. Medovic said the organization provides great exposure for moms to recognize the women making an impact in their communities. She will be expected to deliver some talks as part of her role as a Mother of the Year.

According to its website,” American Mothers remains a valuable network and voice for the 85 million mothers in America and is committed to raising awareness about issues that impact mothers and children. Its purpose is exclusively charitable.