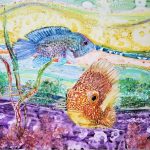 Artworks Around Town is honored to welcome two fine artists for the month of June. Cecy Rose and Alan Fitzpatrick will greet guests at a free reception on Friday June 7, 2019 at Artworks’s North Gallery in Wheeling’s historic Centre Market, from 5:30-8 p.m.. Cecy Rose has had a long history of making art, while Alan Fitzpatrick is a relative newcomer to the process.

Born in Lexington, Kentucky, Rose obtained her MFA in painting at Rhode Island School of Design in Providence. She moved to Wheeling in 1977 after a brief time teaching and working in Pittsburgh, Pa.. Since making her home here, she has taught at Northern Community College (in addition to serving as first time in-house graphic artist for the institution) and Stifel Fine Arts Center. She has also given private lessons in her own studio. Her instruction includes many workshops in drawing, printmaking, mixed media and watercolor on Yupo. In June of 2018, she retired from teaching.

Rose discovered the beauty of working on Yupo which is unique and unlike traditional watercolor papers. It’s takes color very differently from either rough, cold or hot press surfaces. According to the internet, Yupo “is a recyclable, tree- free synthetic paper…extruded from polypropylene pellets.”

Rose states about working with Yupo, “It seems more adaptive to experimentation, though water media experts would probably beg to differ, than working in traditional watercolor on paper.”

Whatever medium Rose uses, her work is stunning and fresh. She has exhibited and won awards many times. Her association with the Independent Artists Group is long standing, having been a founding member along with Joe Raymond, nearly 20 years ago. Held on Mondays at the Stifel Fine Arts Center, the group has a live model to work from. Fitzpatrick is also a member of the Independent Artists Group.

Born in Saskatchewan, Fitzpatrick was surrounded by classmates of Canada’s First Nations which led to his life-long affinity for Native People. His interest in drawing and painting was side tracked when he moved to the United States as a teen ager. After working as a psychologist and business owner, Fitzpatrick turned his attention to studying 18th century history. He became a respected historian, author and lecturer. He wrote four non-fiction books, Wilderness War on the Ohio, In Their Own Words, Place of the Skull and the White Indians. In many cases, he used first person reports and records to glean information found in his works.

Fitzpatrick is self-taught. He began his current art journey several years ago with a drawing class taught by Pat Jacobson, later taking Janet Sheehan’s watercolor class, both held at Artworks. Oils have been his favorite medium for two years as he focuses his efforts largely on portraiture. Fitzpatrick states he places “an emphasis on capturing the emotion and spirit of individuals in an ultra-realistic style, whether it is a historical character from the 18th century or a contemporary model.” He surprises his audience constantly with his compelling portraits. He paints daily.

Cecy Rose will present a Yupo workshop on June 15 at Artworks. from 10 a.m. until 4 p.m. with a half hour break for lunch and a fifteen minute critique at the end. Size of class is limited. For more information and a list of supplies needed, check out The Artworks website or call the desk at 304-233-7540. Artworks is a non profit organization offering display and sales space for juried artists as well as providing ongoing community outreach activities. Hours are 10 a.m. – 5:30 on Monday -Saturday except for Fridays when closing is at 6 p.m.. For information about how to join Artworks, consult the website.