Antique Expert Passes After Years of Sharing With Community 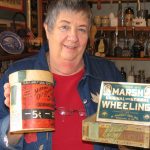 Photos Provided The late Betty June Wymer is shown with some of her Wheeling collection.

I first met Betty June Wymer in the late 1990s while working at Oglebay Institute as public relations director. I was escorted to her home to photograph a rare piece of pottery for then museum curator John Artzberger, who was interested in her collection.

She later went on to donate a significant part of her huge collection of antiques to the Museums of Oglebay Institute and even worked there for a while, giving tours and delighting guests as she gave personal accounts of her glassware, Wheeling artifacts and advertising treasures.

She was even known to sing “The West Virginia Hills” and play her 19th century pump organ on which she once entertained the iconic Senator Robert C. Byrd. Visitors loved her.

Betty June passed away this past Wednesday morning at age 79, after being ill for some time. When I heard the news from her daughter, I was heartbroken thinking about how she will be missed.

She was well known in the region as an antiques expert, first class collector and history buff. Her treasures were always well preserved, documented and, many times, were made in Wheeling, though she was a country girl born in Berlin, Pennsylvania. (Thus, the vintage can of Snyder’s of Berlin Potato Chips she proudly displayed.)

As a child, she told me she caught the antiques bug when her aunt took her to auctions and sales back in Berlin. She began collecting seriously in 1975, after she took a class in antiques offered at West Virginia Northern Community College.

Recently she was downsizing via the auction route since she wanted to stay in her lovely, large home as long as possible and this allowed her to have the caregivers and help she needed. Thankfully, she died at home, so her wish was granted. Betty was an astute shopper and enjoyed the antiques hobby like no one else I’ve ever known. Over the years, she focused her growing collection on Americana antiques and Wheeling treasures. She had a huge collection of toys and advertising art and everything was catalogued, marked and displayed in her museum-like house.

She was the former owner of a real museum, the Wymer’s General Store that was once located in Victorian North Wheeling, then moved to the Artisan Center and finally found its permanent home at the Museums of Oglebay Institute, after she generously donated her beloved general store to the Mansion.

But the Wymer’s General Store was just one part of her accomplishments. She was one of the founders of the Warwick Collectors Club which was responsible for raising money to erect the Warwick granite monument located near Wheeling’s Heritage Port.

She also was a member of countless local preservation groups and other collector groups, both national and local. She was named a West Virginia History Hero in 2010.

Her auctions held over the past eight years or so have included rare glassware from big collectible names like Hobbs, Brockunier; Central; Fostoria; Northwood; Fenton and more.

She introduced me to Francesware and had a fabulous collection of this beautiful glassware which is named after First Lady Frances (Grover) Cleveland. She even gave me a valuable piece once for writing so much about her collectibles.

Of course, I was delighted to write about her collection because she was so helpful, kind and interested in sharing the story of antiques. She herself was a priceless treasure and I’ll miss her.

But I know that her legacy will continue in the many treasures that she shared and in her Wymer’s General Store, now open to the public in the perfect setting of the West Virginia Hills in Oglebay Park.