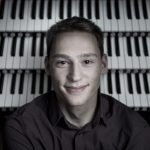 The concert is open to the public. Free-will donations will be accepted at the door.

Hasler is touring in the United States and China. This summer, he will release his debut compact disc with organ works by J.S. Bach, Felix Mendelssohn, Franz Liszt and Marcel Dupre.

The 22-year-old organist, composer and choral conductor is gaining recognition for “his colorful and passionate musicality,” according to critics. In addition to his concert tours, Hasler appears as choirmaster and arranger of transcriptions for organ.

Hasler has participated in the opening ceremony of the Salzburg Festival in Austria. He has performed at the Tyrolean Festival and the International Organ Festival in Dusseldorf, Germany.