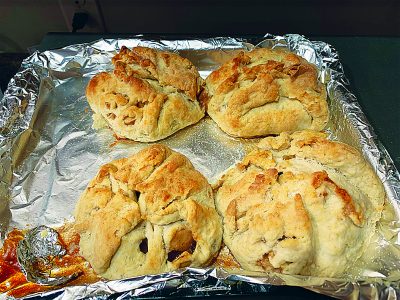 Photo by Heather Ziegler Fresh out of the oven are traditional baked apple dumplings.

Speaking of apples, it’s fall and they are plentiful. So I am always looking at ways to use up apples. I dice an apple and add it to sauerkraut when I make it in the crockpot with a pork roast.

Apples can be added to onions and butter in a skillet, sauted a few minutes and served over pork chops.

As for desserts, it’s fun to try something new with apples.

I found this recipe floating about on Facebook and decided to give it a try. This a very dense, moist bread that would also be good as muffins.

I added chopped walnuts as we like nuts in our breads. I dust the nuts with a bit of flour before adding to the batter so they don’t sink to the bottom of the pan.

Be sure to mash up the canned apples and the fresh apple should be chopped in small pieces. Also note, it calls for self-rising flour.

It’s basically a one bowl, easy recipe. You be the judge if you like it.

Nothing says fall, however, like apple dumplings. These were a fall favorite since childhood and remain popular today. They were a staple when we were growing up and was one of our mom’s favorite things to make.

Mom made hers from a simple pie dough recipe she threw together in an oversized bowl and rolled out with one of her dozen rolling pins that hung around the kitchen.

My sisters and I would be enlisted to peel the apples — most often they were of the McIntosh, Granny Smith varieties or those collected at the orchards of the Levensons, family friends who lived a stone’s throw from The Linsly School campus.

Mom was never one to measure anything when she cooked or baked. There were shelves filled with cookbooks but she mostly followed her own thinking when it came to recipes.

The apples were chopped and tossed with an ample amount of white and brown sugar, cinnamon and pats of butter.

The dough was cut into generous circles and the chopped apples were heaped in the middle. We would bring the sides together and pinch the tops closed. A sprinkle of sugar and cinnamon was the final touch before they entered the oven.

Now here is where it gets interesting. While she then baked most of the apple dumplings in the oven, she also made “boiled” apple dumplings, which was our dad’s favorite way of eating them.

The raw apple dumplings would be placed in individual sheets of aluminum foil and tightly sealed. Then they would be dropped into a boiling kettle or large pot of water . The water would be lowered to a simmer and the lid placed on the kettle. Depending on the size of the dumplings, they would boil for about 30 minutes, more if needed.

The dumplings would be cooked through but retain an actual dumpling texture. Either way of cooking, the dumplings were best served with vanilla ice cream, or covered in milk. Some recipes call for a sweet syrup to be poured over the dumplings, but we preferred the ice cream or milk version.

A bonus on apple dumpling day was using up the leftover scraps of dough. Mom instructed us to roll out the small pieces of dough, spread some jelly on the dough and roll them up jelly roll style. They were baked alongside the apple dumplings and were a special side treat enjoyed by Mom’s kitchen helpers.

Fall baking with apples is a great time to teach the younger generation a family tradition before recipes are lost.