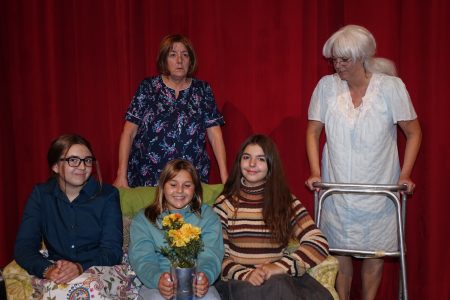 Cast members for Towngate Theatre's production of “The Effect of Gamma Rays on Man-in-the-Moon Marigolds” include, from left front, Taylor Andrews, Carter Bauer and Grace Thompson; back row, Dee Gregg and Rachel Thompson.

WHEELING — Oglebay Institute’s Towngate Theatre opens its 51st season of community theater with Paul Zindel’s Pulitzer Prize-winning drama “The Effect of Gamma Rays on Man-in-the-Moon Marigolds.” A story of perseverance and hope, it has been hailed as one of the most significant and affecting contemporary American plays.

“Gamma Rays” tells the story of Beatrice, a bitter and domineering mother, and her two teenaged daughters, the studious Tillie and the emotional Ruth.

Life with the abusive Beatrice resembles a hell more than a home, but shy Tillie may have found a light beyond her bleak home life. Encouraged by her teacher, she undertakes a gamma ray experiment with marigolds for the school science fair. The project-which provides the play’s title-helps her to begin to bloom. As Tillie’s science experiment proves, something beautiful and full of promise can emerge from even the most barren, afflicted soil.

“The Effect of Gamma Rays on Man-in-the-Moon Marigolds” is Paul Zindel’s best-known play. It is an autobiographical drama loosely based on his experiences growing up. The play’s main character, Beatrice, is modeled on Zindel’s mother.

The play opened off-Broadway in 1970 and in 1971 made a brief jump to Broadway. Overall, the play enjoyed a very successful New York run of 819 performances. Zindel’s portrayal of the painful side of family life struck a chord with audiences who found they could easily relate to the themes of loneliness and shattered dreams. The play was critically acclaimed and earned several awards, including an Obie Award for best play of the season (1970), the New York Drama Critics Circle Award for best American play of the year (1970) and the Pulitzer Prize for drama (1971). It was so popular that in 1972 Twentieth Century-Fox released a film version starring Joanne Woodward.

Towngate is the premiere venue for community theater in Wheeling, providing an intimate theater experience with talented local actors performing in a variety of though-provoking, heartwarming, comedic and historically significant works from renowned playwrights and talented newcomers.

A church-turned-theater, Towngate is located in Wheeling’s historic Centre Market District and serves as an entertainment destination for residents of Wheeling, the Upper Ohio Valley and beyond. In addition to community theater, Towngate also offers poetry and spoken word performances, children’s theater, ballet, improvisational comedy and live music. Towngate is also a single screen cinema, offering movies on select evenings and features changing art exhibitions in The Gallery at Towngate. Theater classes are also offered year-round.