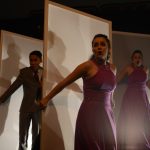 Members of the St. C. Singers perform their award-winning show “Shadows Into the Light” during a competition in Hurricane, W.Va. earlier this winter. The St. C. Singers will play host to their own show choir competition all day this Saturday at Buckeye Local High School, where 10 show choirs from smaller schools throughout Ohio and West Virginia will compete and entertain audiences. (Photo Courtesy of John Rymer)

RAYLAND — Ten outstanding show choirs from schools throughout Ohio and West Virginia will travel to the Upper Ohio Valley on Saturday to compete in the annual St. C. Division 3 Show Choir Invitational.

Hosted by the area’s only high school show choir –the award-winning St. C. Singers from St. Clairsville High School — the all-day competition will take place at Buckeye Local High School in Rayland, Ohio. Although the invitational is a St. Clairsville event, it has taken place in recent years at Buckeye Local, which has ample parking, a centralized cafeteria and commons area, spacious kitchen and large, comfortable auditorium where the performances take place throughout the day.

The St. C. Division 3 Show Choir Invitational is a contest for smaller schools with enrollment of 750 or fewer high school students. Show choirs from 10 schools will compete throughout the day for various awards and to secure a spot in the evening finals. The top five choirs will compete for additional awards and will vie for the title of Grand Champion during the finals.

Typically at show choir competitions, groups compete in preliminaries for division titles against choirs from schools of the same sizes before the top groups regardless of division move on to compete against each other in the finals. Oftentimes, even the best small school choirs have to compete in final rounds against groups from much larger schools. The St. C. Division 3 Invitational levels the playing field for groups from smaller schools, which have a great chance in the finals competing against more evenly matched groups.

The St. C. Singers are under the direction of Wayne Berk and assistant director Kristen Rateno.

On Saturday afternoon, the St. C. Singers will perform this season’s show “Shadows Into the Light” one last time for area crowds before heading to their final competition at Cabell Midland High School in Ona, W.Va. on March 2 and at the Big Apple Classic at the College of Staten Island on March 16 during the school’s performing arts trip to New York City.

Presented by the St. C. Vocal Music Boosters, the St. C. Division 3 Show Choir Invitational boasts some of the best accommodations the region’s show choir schools have to offer, including a breakfast, lunch and dinner menu that raises the bar for fundraiser cuisine. There will also be bake sale smorgasbord, flowers, shoutouts, T-shirts by American Graphix and Apparel, photo portraits, candy-grams, raffles and more.

All proceeds benefit the St. C. Vocal Music Boosters, which support the St. C. Singers and the many other vocal music programs at St. Clairsville High School.

Competitions begin promptly at 10 a.m. and continue through 4 p.m. during preliminaries. The St. C. Little Singers perform at 4 p.m., and the St. C. Singers perform at 4:30 p.m. before the daytime awards ceremony at 5 p.m. After a dinner break, the finals kick off at 6:30 p.m. and continue through 9 p.m. St. C. Sweet Harmony perfoms at 9 p.m., and the event wraps up with evening awards at 9:30 p.m.

There will be different admission prices for all-day passes, daytime-only passes and evening passes. All passes will be valid for the exhibition performances of the St. C. Little Singers and St. C. Singers.

“You should absolutely try to get out and see these kids compete,” said Berk, who also directs the vocal music department at St. Clairsville High School. “It’s a great group of kids from all over West Virginia and Ohio bringing great music and a lot of energy to the stage.”