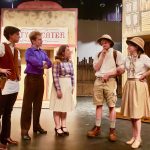 WHEELING — Lucky audience members will get the chance to witness a classic Gershwin musical production when the Park Players of Wheeling Park High School present their spring musical “Crazy for You” today through Sunday, May 3, 4 and 5. The play will be held in the high school’s J.B. Chambers Performing Arts Center.

The curtain goes up at 7 p.m. today and Saturday and 3 p.m. on Sunday, and is sure to be an entertaining audience pleaser.

A zany rich-boy-meets-hometown-girl romantic comedy, “Crazy for You” tells the story of young New York banker Bobby Child, who is sent to Deadrock, Nev., to foreclose on a rundown theatre. In Deadrock, Bobby falls for spunky Polly Baker, the theatre owner’s daughter. But Polly takes an instant dislike to the city slicker, so Bobby vows – through cunning, razzmatazz, and a hilarious case of mistaken identity – to win Polly’s heart and save the theatre. Memorable Gershwin tunes from the score include “I Got Rhythm,” “They Can’t Take That Away from Me,” “Embraceable You,” and “Someone to Watch Over Me.”

Bill Cornforth, one of the theater directors at Wheeling Park, leads this production. When asked about the show, Cornforth said, “‘Crazy for You’ is an upbeat musical with broad comedy, energetic dancing, and the exquisite music of George and Ira Gershwin. Our cast clicked with the show right away and have had a fun rehearsal period. Our principals have dynamic chemistry, and our ensemble is a cohesive force. Our tech crews have dedicated long hours to make this show a pleasure for all.”

The cast for this year’s musical is made up of 36 of Park’s most talented students. Leading the cast as our young man from New York who is in love with musical theatre is Vance Mazure as Bobby Child. The spirited Polly Baker is played by Faith Richter. Afton Aulick plays New York society debutante, Irene Roth. The English tourist, Eugene Fodor, is played by Luke Ochsenbein and his wife, Patricia Fodor is portrayed by Morgan Marquart. Robert Irvin plays the saloon proprietor in Deadrock, Lank Hawkins. Playing the role of Bela Zangler, an established theatrical producer in New York is Tino Kayafas.

Assisting Cornforth in the capacity of production assistants for the play are Kayla Kreitzer Nelson, Isabella Droginske, Brigitte Mazure, Scott Hedrick and Mike Harris. Paula Lucas serves as the art consultant for the production.

On the musical side, Joyce Jingle will act as the production’s musical director. She stated, “George Gershwin — it just doesn’t get any better than that! Familiar Gershwin classics such as ‘I’ve Got Rhythm,’ ‘Someone to Watch Over Me,’ and ‘Nice Work If You Can Get It,’ have brilliantly been woven into this funny and entertaining story line.” “This extremely talented cast rocks every aspect of this show — the difficult Gershwin melody lines, the energetic tap numbers, the humorous supporting roles and the love story between Bobby Child and Polly Baker. You will laugh, cry and certainly tap your toes!”

Anna Harsh, choreographer, said, “‘Crazy for You’ involves so many styles of dance from ballroom to tap dance. The audience will be singing and dancing along in their seats with so many of the musical numbers. A great show for the family to enjoy.”

Senior Maria Goudy acts as a student leader and Mr. Cornforth’s assistant director for the production.

Park Player performances bring hundreds of people from the community together to experience the creative spirit of their talented actors and technical crews. It is their hope that they can count on your support.

Tickets can be reserved by calling the theater at 304-243-0417, the high school’s main office at 304-243-0400 or purchased online at wphswv.booktix.com. They are on sale now. You won’t want to miss another extraordinary Park Player production.