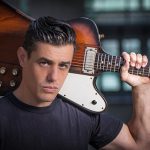 WHEELING — A full slate of concerts is coming to BluesDays at River City, all leading up to a weekend of award-winning blues at Heritage Music BluesFest on Aug. 9-11.

“A few years ago when we decided to do blues shows at River City, it was done as a run-up concert series, once a week, leading up to BluesFest,” Wheeler said.

Then, he began to sprinkle blues shows throughout the year for area blues aficionados. However, for the past few months, his day job as executive director of the Wheeling Symphony has kept him quite busy, and he’s not presented a BluesDay since the holiday party in December.

“So when I started to hear my local blues fans ask, ‘when are you going to do another show at river city?’ I realized I had not been fair to my blues audience by not doing shows. I decided to put as many in as I could between now and the festival,” he said.

Many of the BluesDays concerts, Wheeler said, are acts he might have liked having on the festival, but did not fit into the lineup for one reason or another. … “So, I invited them to do a show at River City.”

Shows set for BluesDays at River City include:

∫ Selwyn Birchwood, June 11: Birchwood is an International Blues Challenge winner and an Albert King winner on guitar, Wheeler said. Now touring their latest release on Alligator Records, they play “a little bit of everything — from straight-ahead blues to Delta blues to R&B and soul,” he said.

∫ Brandon Santini, July 2: A harmonica player, Santini’s most recent release, “The Longshot,” debuted in March at No. 7 on the Billboard blues chart.

∫ Lindsay Beaver, July 9: A singer and front person in the band, Beaver also plays drums. “She was recommended by Bruce Iglauer from Alligator Records. He tried to get her on this year’s festival, and it didn’t work out tour-wise, but she happens to be coming through to do a BluesDays date. Iglauer described her as ‘the love child of Amy Winehouse and Little Richard.'”

∫ Nick Schnebelen, July 17: Nick is one of three siblings who won the IBC competition a few years ago, and then rose to fame as Trampled Under Foot. “His sister Danielle is on the BluesFest, but we didn’t find a slot for Nick, so he’s coming to River City,” Wheeler said.

∫ Nikki Hill, July 24: “Nikki Hill and her husband guitarist Matt Hill have been doing a lot of rockin’, soulful blues,” Wheeler said. “She’s got a little bit of a ’50s vibe she does with the blues.”

Each show is roughly a two-hour concert, he said, beginning at 8 p.m. River City is located at 1400 Main St., Wheeling.

Attendees to BluesDays at River City can purchase tickets for BluesFest at early bird prices.