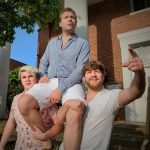 Noah Hilton, Brandon Reed Gilmore and Andrew Dillie, from left, rehearse for the Brooke Hills Playhouse production of the musical comedy, “Mama Mia,” with a book by Catherine Johnson and music and lyrics by ABBA’s Bjorn Ulvaeus and Benny Andersson. The play kicks off tonight and continues with performances this weekend and next weekend.

WELLSBURG — When the Brooke Hills Playhouse’s production of the musical comedy, “Mama Mia” opens this weekend, it will be the result of a team effort, according to director Emily Hores of Wellsburg. The so-called “ABBA Musical” features a book by Catherine Johnson and music and lyrics by ABBA’s Bjorn Ulvaeus and Benny Andersson.

“Mama Mia!” takes place during a 24-hour period in the summer of 1999 on the fictional Greek island of Kalokairi, where bride-to-be Sophie dreams of having her father give her away at her upcoming wedding. The only problem is that Sophie’s mother, the free-spirited Donna, refuses to identify Sophie’s father, so Sophie narrows down the list to three likely suspects and invites all three men to the wedding.

Hores’ said she assembled her production team after she decided that she wanted to act in the show, too. “I had agreed to direct ‘Mamma Mia’ before deciding to audition for the show, so when I decided to do both, I knew that I would need help in order to follow through on my director obligations,” she explained.

She continued, “First, I enlisted Lakin Weaver, with whom I’ve worked on three previous shows, as musical director, and together we built a production team that also includes Pete Fernbaugh as assistant director and Karissa Martin as choreographer.” Hores emphasized, “We all agreed that, in order to be above board, I needed to step aside from casting, so Pete and Lakin cast the show.”

Hores said that the teamwork extends to playing opposite and directing her daughter, Odessa Hores, who plays her daughter in the show. “I am very fortunate to be able to direct and perform with my daughter, as I have watched her grow not only as my child but from a young performer to a seasoned one,” she observed.

“I love collaborating with Odessa, and having the opportunity to build our characters together has been a dream I never thought I would get the opportunity to fulfill,” she added. But what happens when mother and daughter see a scene differently? Hores responded, “When we have a difference of opinion I defer to assistant director Pete Fernbaugh to navigate the scene.”

Because of the physical limitations of the Playhouse stage, Hores says she enlisted the services of choreographer Karissa Martin to deal with the many production numbers. “Karissa is a highly skilled dancer and choreographer who has performed several shows on the Brooke Hills stage, and she has choreographed our dance numbers accordingly,” she said.

The teamwork in “Mama Mia” extends to the entire cast and crew.” There isn’t one number in the show where the entire cast isn’t singing,” Hores note, continuing, “Our production is all live music with the ensemble singing off stage as needed as well as on-stage with our band is also functioning as a part of the ensemble cast in that they are placed center stage,” adding, “We have named our ensemble ‘the Greek Choir.'”

The rest of the Playhouse’s 48th season includes “Snow White and the Seven Dwarfs,” adapted by Michele L. Vacca from the beloved Grimm Brothers fairy tale, to be staged July 26-28 and Aug. 2-4; and John Patrick’s comedy, “A Bad Year for Tomatoes” to be presented Aug. 16-18 and 23-25. The season will end the weekends of Sept 20-22 and 27-29, with Ken Ludwig’s award-winning comedy, “Lend Me a Tenor.”