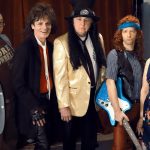 WHEELING — Mystery Theatre Unlimited will present a hilarious musical comedy murder mystery to Wheeling Park’s Amphitheatre starting at 7 p.m. Tuesday, July 16. As a part of the City of Wheeling’s “Toe Tappin’ Tuesdays Too” summer outdoor concert series, the comedy group will present “Rock ’em Dead,” in a performance that is free, family-friendly and open to the public.

In “Rock ’em Dead,” a musical-comedy murder mystery show, a rock band that once enjoyed great success, but dissolved in a bitter break-up, is poised to be inducted in the Rock Hall of Fame. The problem is the surviving band members must reunite, but they hate each other.

In the show, the popular 1980s rock band Tone Def was known primarily for its excessive theatrics and outrageous antics, both onstage and off.

Thirty years later, the band’s manager is determined to reunite the band not only for the award, but also to use the renewed media attention to launch a world tour. But the former band mates have not reconciled after an ugly split-up.

While androgynous British bassist David Boney (played by Butch Maxwell) has enjoyed some moderate chart success with albums such as “Izzy or Izzn’t He,” guitarist Eli Johnson (played by Ryan Sears) has become a full-time drunk after losing his girlfriend, Binaca Bruja (played by Vera Barton-Maxwell), to lead guitarist Gash (played by Rick Call), who has forsaken rock for a religious cult.

Manager Morey Schwartzmeyer (played by Dustin Heavilin) must navigate the egos, tempers and old arguments as well as deal with the unexpected death of the band’s drummer, Wrongo Squat.

Given the tensions within these characters, this reunion could literally be murder.

While Mystery Theatre productions always feature musical performances, this is the only show that uses no recorded music, but instead, all of the music is performed live by the actors.

The Wheeling-based ensemble has been writing and performing original comedy murder mysteries since 1996, with more than 60 unique shows in its repertoire. The performances include audience interaction and the opportunity to solve a murder mystery and question the survivors after the murder has occurred. Some audience members will also play small parts during the show.

Audience members are encouraged to bring blankets, chairs or sit on provided benches. In case of rain, the show will be presented in the skating rink area, adjacent to Wheeling Park’s White Palace.