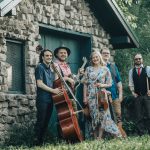 BARNESVILLE — Skyflight Productions presents an evening with The Wildwoods on Saturday, July 13, at The Grange Hall in Barnesville.

Nebraska natives The Wildwoods, a band from Lincoln, Neb., bring a pioneering sound to Americana roots music. Formed in 2012, The Wildwoods released their first album, “A Little Sweeter,” in 2014 and have since released two more albums independently: “Take A Chance” (2016) and “Sweet Nostalgia” (2017). The two lead vocalists of the group, Noah and Chloe Gose, also released a Duo EP titled “Birdie and Goose” in late 2017.

Following the successful release of their album, “Sweet Nostalgia,” the Wildwoods have opened for touring bands such as Elephant Revival, The Hunts, The Accidentals, The Von Trapps and Jamie Wyatt. They continue to tour regionally throughout the Midwest and Mountain States. The group was nominated in 2016, 2017 and 2018 by the Omaha Arts and Entertainment Awards as one of the top Americana Folk Bands in the area, and in 2017 as Local Album of the Year for their album, “Sweet Nostalgia.” In December 2017, they performed live as part of the Paste Music & Daytrotter Sessions.

According to Landon Kuhlmann of Paste Magazine & Daytrotter, “The Wildwoods know exactly what kind of music they want to make. It’s not often we hear a sound this focused. The voices are very different in timbre and delivery, yet mix with each other perfectly. Bring a friend or go alone, either way you’ll find yourself reminiscing on the good times and finding peace with the bad ones.”

Adrew Stellman, editor of Hear Nebraska Magazine, wrote, “The young songwriting tandem of Chloe and Noah Gose harmonize like something out of the Depression Era, fitted with a certain weight yet warmly and triumphantly capable of lifting hearts regardless.”

The Wildwoods strive to make music that touches the soul and speaks of truth, that will be sure to melt your heart with every performance.