Trampled Under Foot Sibling To Play at BluesDay in Wheeling 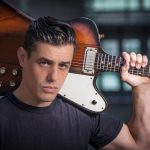 Schnebelen came to widespread attention as a member of Trampled Under Foot, the Kansas City family band that was founded in 2004 and won the 2008 International Blues Challenge in Memphis. He was also singled out for the Albert King Award as the best guitarist in the competition that year.

Joined by younger brother, Kris, and sister, Danielle, TUF enjoyed two highly successful albums produced by Tony Braunagel, “Wrong Side of the Blues” (2011) and “Badlands” (2013), which climbed to the top position on Billboard’s Top Blues Album charts. The band was nominated in 2012 as Band of the Year at the Blues Music Awards and won that honor in 2014.

“His sister Danielle is on the BluesFest, but we didn’t find a slot for Nick, so he’s coming to River City,” said Bruce Wheeler, producer of BluesDays at River City and the Heritage Music BluesFest.

Music has been in Schnebelen’s blood for generations, he said.

His mother and father were professional musicians, his grandmother was a big band singer, his grandfather played guitar, and his great grandfather was a member of a string band as far back as the 1920s.

The energy of Schnebelen’s shows with his solo band was captured in the recording of “Live in Kansas City” in 2017.

His debut solo work, “Crazy All By Myself,” also was produced by Braunagel and features songs written with Gary Nicholson, Jeff Paris and Dave Duncan. The CD flexes with styles ranging from slow blues to soul to funk to rock, with even a dash of rockabilly.

The title cut, a blues tune co-written with Dave Duncan, cuts deeps lyrically and musically. Schnebelen’s stinging guitar work is underpinned by Mike Finnigan’s flowing piano at its base while the lyrics paint a picture of a man meeting the realization that he doesn’t need a woman to lead him down the path of destruction, that’s he’s perfectly capable of doing it on his own.

“This CD has so many different styles on it,” Schnebelen said, “but it still works. Most of the songs started in my brain and then were expanded lyrically, but they seem to pair up well here so the varied styles don’t seem out of place.

“My goal is to continue to write and create new styles for the blues. I want to stand out as an original artist.”

More about Schnebelen can be found at his website, www.nickschnebelenkc.com.

Other upcoming BluesDays at River City include:

∫ Nikki Hill, July 24: “Nikki Hill and her husband guitarist Matt Hill have been doing a lot of rockin’, soulful blues,” Wheeler said. “She’s got a little bit of a ’50s vibe she does with the blues.”

Each show is roughly a two-hour concert. River City is located at 1400 Main St., Wheeling.