Vintage Raceboats Will Once Again Be the Highlight of Wheeling Regatta 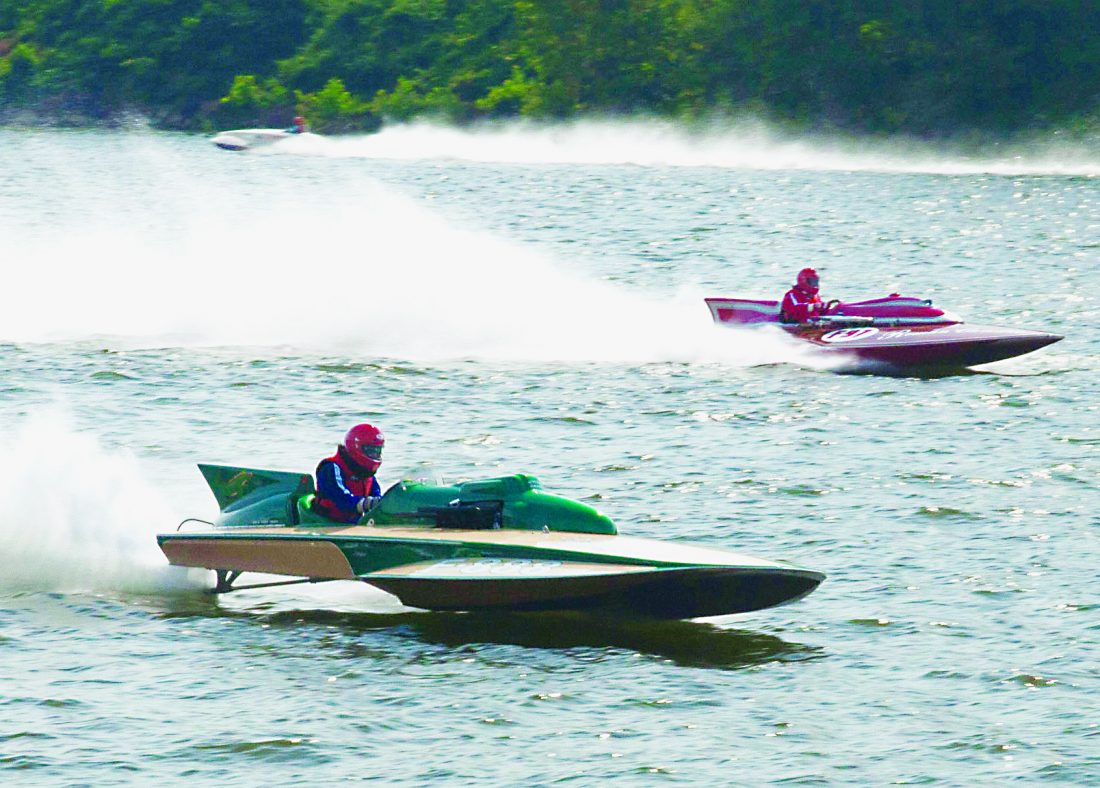 Chris Cox, of Wheeling, in the “Jade Dragon,” in foreground, and Chris Gardill, a Wheeling attorney driving “Roman Candle,” duel it out on the straightaway on the Ohio River. Both boats will be among about 50 expected for the annual Wheeling Vintage Raceboat Regatta on Labor Day Weekend. The event will be held at the Heritage Port in Wheeling.

WHEELING — Most motor-racing activities are not kid-friendly, but the annual Wheeling Vintage Raceboat Regatta, presented by WesBanco, is, and co-founder Debbie Joseph thinks that’s one reason the event has been so popular.

Held at the Heritage Port in Wheeling, the regatta will be back for its 14th annual running on Labor Day weekend.

More than 50 vintage raceboats — several of them capable of skimming over the Ohio River at more than 100 miles per hour — are expected for this year’s event. Though actual racing is not permitted, because the boats do not meet modern safety requirements, both Saturday and Sunday next weekend will be filled with exhibition runs during which drivers often go head-to-head within a few feet of one another, at high speed.

“I don’t know any other sport where you can go and sit in the vehicle that’s being run,” said Joseph, who, with her husband Dan, founded the regatta. The Wheeling couple continue to serve as co-chairs for the event.

Large crowds have attended the regatta, for which there is no admission charge, for many years. Though it features entertainment, special activities for children and a multitude of food vendors, the key attraction is the old boats. Some are more than a half-century old and several raced at the old New Martinsville Regatta (where another vintage event now is held every Father’s Day weekend).

Often painted in bright colors and featuring names ranging from “Screemin’ Meemie” to “Jade Dragon,” the raceboats are far from off-limits to children. Each day of the regatta, during a noontime break, the pit area where boats are kept between heats is open to the public. Special precautions are taken to keep visitors safe. Many drivers invite the youngsters to climb into the cockpits for photographs. Autographs are given freely.

One reason many parents seem attracted to the event is the noontime pit visits. Minutes after that session ends, high-speed hydroplane runs resume and moms and dads “watch that same boat their child was sitting in before, out there going 80 or 90 miles an hour,” Debbie Joseph said.

Another attractive aspect to the regatta is that all proceeds benefit the Easter Seals Rehabilitation Center, based in Wheeling but offering services in West Virginia and Ohio from Steubenville south to Parkersburg. Since its inception, the regatta has donated more than $80,000 to the center.

Though hydroplane raceboat events are safe for spectators, they can be dangerous for drivers. A forceful reminder of that came earlier this summer when a popular hydroplane owner and driver, Rick Beatty, 60, of Dayton, Ohio, was killed when his boat struck a log during a vintage event. Beatty and his “Heavy Duty” hydroplane, one of the most powerful on the circuit, have run many times in Wheeling.

Debbie Joseph said a special memorial event honoring Beatty will be held just after opening ceremonies at the regatta on Saturday. After the national anthem is sung and a prayer is offered, three raceboats Beatty had owned will be launched for a run in his memory. It will conclude with the two smaller boats peeling off, something like the “missing man” formation often seen in flights honoring deceased pilots, leaving only the powerful “Heavy Duty” roaring around the circuit. At the same time, every raceboat engine in the pits will be fired up and run for about 10 seconds.

Events at this year’s regatta begin Friday afternoon and evening, with raceboat owners registering. At that time, the pits will be open to the public. Both Saturday and Sunday, opening ceremonies will begin at 9:45 a.m. A special feature Sunday will be the Marshall University Fife and Drum Corps performing the national anthem. From about 10 a.m. until noon both days, raceboats will stage exhibition runs. From noon until 1:30 p.m., pits will be open to the public, with drivers signing autographs and allowing pictures with children. The first 100 people into the pits will receive special raceboat posters. Then, after 1:30 p.m., exhibition runs will resume. Children’s activities will be available both days from noon until 5 p.m.