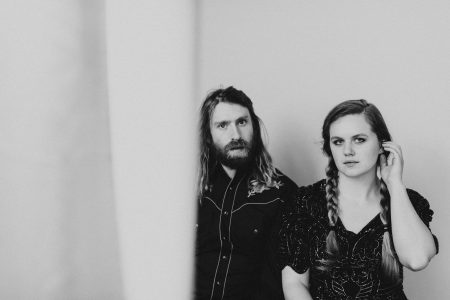 A broken-down van ranks pretty high on the list of worst-case scenarios for touring musicians. When it happened to Harper’s Ferry, W.Va. band Mink’s Miracle Medicine, though, it ended up being an important turning point for how they approach making music.

Comprised of Melissa Wright and Daniel Zezeski, Mink’s Miracle Medicine are preparing to release “Pyramid Theories,” a new album the two began writing after their van broke down in Pittsburgh and they found themselves stranded for several days. That unintentional break gave Wright and Zezeski time to contemplate their shared musical philosophy, and they ultimately realized that they needed to make music for themselves, rather than trying to appease anyone else. When they got home, Wright immediately began writing what would become “Pyramid Theories.”

“Pyramid Theories” follows the duo’s 2017 debut album House of Candles. House of Candles was released to critical acclaim, premiering alongside a rave review on Noisey, which called the LP “a solid record that really establishes Wright and Zezeski not just as talented and articulate, but smart enough to be willingly vulnerable in a genre that doesn’t tend to reward legitimate emotions.”

“I’d been writing a series of songs where they were all called ‘Pyramid Theories’ — there was ‘Pyramid Theories One,’ ‘Two,’ ‘Three,’ ‘Four,’ about ancient aliens and building the pyramids, and theories on humanity,” Wright said. “That was happening while I was writing the songs on the record. So it spoke to the era.”

Both Wright and Zezeski, who met five years ago in the green room of a Hackensaw Boys concert, have deep musical roots. Wright studied vocal performance at Berklee College of Music in Boston before eventually moving back to West Virginia, where she also teaches music lessons. A furniture maker by day, Scranton native Zezeski cut his teeth in punk and ska bands as a teenager, eventually leaving home to hop trains and ride the rails with his Epiphone Hummingbird guitar in tow. Together, Wright and Zezeski have opened for acts like Woody Pines, the Hackensaw Boys, YARN, Jubilee Riots, and Gallows Bound. They currently live in a singlewide trailer on the Shenandoah River.

Wright wrote the bulk of the album on that singlewide front porch, during what she describes as “a writing sprint” where she wrote daily. They recorded the album over two weekends in the Poconos. “It was really icy when we were recording,” Wright said. “There were times when the icicles hanging off the barn we recorded in were a few feet long. There was ice packed onto the staircase, we had to be really careful coming up and down. We drank about six pots of coffee between the three of us every day.”

Both the writing and recording of “Pyramid Theories” hewed closely to the duo’s new philosophy, which found them following their instincts rather than trying to write songs that fit any preconceived idea or genre mold. As a result, “Pyramid Theories” sounds fresh and inventive, while still retaining the melange of punk, old-time, folk and rock for which they’ve come to be loved.

“We were going for a bit of a different sound, which was exciting,” Zezeski said. “We’ve been playing for so many years now that we understand our writing style a lot better. It’s easier to pick up on each other’s mood and whatnot. It’s more natural, for sure, and more fun.”

The bad news is the van still doesn’t run. But the good news is that the music that came from one stroke of bad luck more than makes up for it. “Pyramid Theories” doubles down on what originally made Mink’s Miracle Medicine such critical darlings, while also exploring plenty of new territory, both sonic and extraterrestrial.