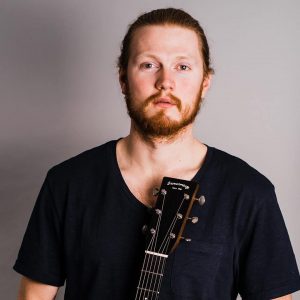 An American-citizen born and raised in the heart of the Canadian prairies while maturing on the west coast of British Columbia, Noah Derksen writes with the groundedness of harsh Manitoba winters mixed with the optimism of British Columbia’s coastline. Ever seeking motion and progression, Noah has spent the past three years honing his live performance skills across Canada and the United States, playing concerts from British Columbia to Nova Scotia and New York to California.

In 2019, Noah is releasing his third album entitled “America, Dreaming.”

Jane Kramer from Asheville, N.C., will open the show supporting Derksen. Lauded by UK music reviewer Three Chords and the Truth as sounding like she was “born to gypsy poets and raised by Emmylou Harris,” Asheville, N.C. songstress Jane Kramer has garnered international recognition for the sultry, heartrending originality of her vocals and for the heavy-hitting lyrical eloquence of her songwriting.

With deep roots in the musical traditions, culture and lore of her beloved Appalachia, Kramer’s songs are introspective, gracefully gritty and fiercely memorable. They elegantly sweep listeners down the gravel roads and southern coastal highways, midnight truck stops and lonely motel rooms of “hard learning” and lead home to the wooded Blue Ridge Mountains with moving acceptance of our flawed human experience.

Kramer’s live performances are equally as poignant and engaging; rich with accessible, warm, often hilarious storytelling and gracefully lifting the veil between the audience and the performer.

Following the February 2016 release of her second studio album, Carnival of Hopes, Kramer has been touring nationally and internationally, playing for sold-out audiences in listening rooms, theaters, pubs, festivals, living rooms and arts councils in support of the record. This has gained her a loyal following from Portland, Ore., to Scotland, U.K.

A social worker, former domestic violence crisis counselor and avid humanitarian, Kramer continues to perform and teach about the songwriting process in prisons, rescue missions, programs for at-risk youth, classrooms, hospitals and animal shelters, sharing her message of music as a powerful tool for healing, connection and compassion.

Whether Kramer is solo, wielding only her custom E.J. Henderson guitar and her most important instrument: her emotive, ethereal voice, or backed by her full band featuring the virtuostic instrumentalists that comprise Asheville’s Free Planet Radio and internationally renowned multi-instrumentalist Billy Cardine (Biscuit Burners, Acoustic Syndicate, The Bluegrass Journeymen) the power and poignance of this truly gifted songstress is deeply felt and long-remembered.

Quoted as ” … an artist on the rise” by acclaimed American songwriter Mary Gauthier and as ” … a voice that can only be described as one of the purest in modern Americana” by Dave Stallard of Blue Ridge Outdoors, Kramer has performed with such well-known artists as Joan Osborne, Amy Ray of the Indigo Girls, Appalachian troubadour Malcolm Holcombe, two-time Grammy award-winning bassist Eliot Wadopian, Ricky Scaggs, Shawn Mullins and Maria Muldaur.

Kramer is set to release her much-anticipated third studio album featuring her band, “Free Planet Radio and Billy Cardine,” in 2019.

For more information, call 423-276-2653 or visit Skyflight Productions on Facebook.