One-Woman Performance to Take Audience ‘Through the Looking Glass’ 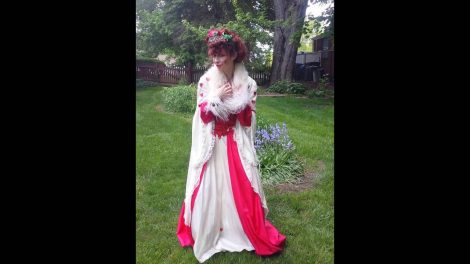 Carol Weakland as the Queen of Hearts

MOUNDSVILLE — Take a magical whirlwind ride through Lewis Carroll’s much-loved classics — with none other than the Queen of Hearts holding the reins.

A performance of “Alice in Wonderland & Through the Looking Glass” will showcase the talents of actress, director and writer Carol Weakland at 6 p.m. on Tuesday, Oct. 29, at the Moundsville-Marshall County Public Library.

This very special event is intended for both adults and children.

In this one-woman theatrical retelling, Carol Weakland is the Queen of Hearts and voices all the characters. The Queen will also address “her court” about these Lewis Carroll books, the characters and the author. Following the performance Weakland will briefly discuss her own fantasy books and the inspiration behind their creation.

Weakland’s talent for adapting literature into captivating live performances has kept her audiences coming back for more. The actress and story-teller performs a wide range of one woman shows based on famous literature such as “Jane Eyre,” “The Scarlet Letter” and “The Cricket on the Hearth.”

She also has performed in films, such as the award winning Victorian murder mystery “A Murder Party” and the comedic thriller “Overdue,” as well as working in commercials and traditional theater. Weakland is the founder of Great Expectations Theatrical Productions, based in Youngstown. She is the author of the Morgen of Avalon series, Land of the Twilight Mist and “The Arthurian Trilogy.”

The Oct. 29 show is free and open to the public and cookies will be available. It is sponsored by the Robert Baker Family.

The Moundsville Public Library is located at Fifth Street and Tomlinson Avenue. For more information, call 304-845-6911.