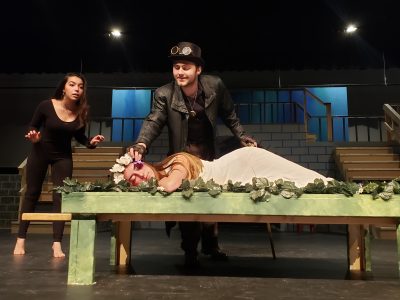 WHEELING — An evening of fantasy and whimsy await lucky audience members who will get the chance to witness a classic Shakespeare comedy when the Park Players of Wheeling Park High School present their fall play, “A Midsummer Night’s Dream,” today through Sunday, Nov. 15-17.

The play will be held in the high school’s J.B. Chambers Performing Arts Center.

The curtain goes on at 7 p.m. today and Saturday and 3 p.m. on Sunday, and is sure to be a moving audience pleaser.

Originally set in Athens (updated to Central Park in New York City), the action follows the misfortunes, heartache and eventual happiness of two couples and the amusing pranks of meddling, magical fairies. These two sets of couples–Hermia and Lysander, and Helena and Demetrius– have their romances complicated by Oberon and Titania, the King and Queen of the Fairies, and their servant Puck.

“A Midsummer Night’s Dream” brings additional humor with its play-within-a-play format, in which a group of mechanicals celebrate the upcoming marriage of Theseus and Hippolyta by putting on a poorly performed play.

Kayla Kreitzer Nelson, one of the theater directors and alumna of Wheeling Park High School, leads the production.

When asked about the production, Nelson stated, “As an English teacher, it has been a dream of mine to direct a Shakespeare play. The cast has worked tirelessly to bring these classic characters to life. Many of the seniors in the production I directed in their first productions at WPHS as freshmen in Introduction to Speech and Theater. It has been an honor to watch them grow as actors and actresses and a true privilege to direct them in their final fall play.”

The cast for this year’s play is made up of 22 of Park’s most talented students. Leading the cast as the four lovers are Amanda McGovern as Hermia, Ryan Quickel as Lysander, Brooke Anderson as Helena, and Tyler Faulstick as Demetrius. The fairy King, Oberon and the fairy Queen, Titania are played by Adam Marquart and Laura Tighe, respectively. The mischievous sprite, Puck, is played by Lucia Perri. The merry band of mechanicals are portrayed by Dailey Ward as Bottom, Emma Mattingly as Quince, Jacob Kuntz as Flute, Joey Carter as Snout, Braeden Keen as Starveling, and Hailey Lewis as Snug.

Assisting Nelson in the capacity of production assistants for the play are Bill Cornforth, Isabella Droginske, Brigitte Mazure, Scott Hedrick and Mike Harris.

Junior Collin Connor acts as a student leader and Nelson’s assistant director for the production.

Park Player performances bring hundreds of people from the community together to experience the creative spirit of their talented actors and technical crews. It is their hope that they can count on your support.

Tickets are on sale now.