Theater Staged by Kids, for Kids 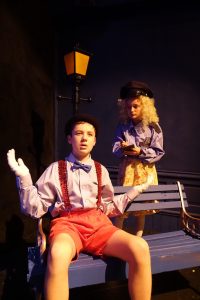 On Stage at Towngate Theatre in a scene from “Law and Order: Fairy Tale Unit” are Grant Kenamond and Audrey Kenamond.

Oglebay Institute director of performing arts Tim Thompson has assembled a cast of 30 talented young actors from throughout the Ohio Valley. Set up like a TV episode of “Law and Order” the play’s opening statement tips what the evening is going to be about.

“I love this play. It’s hilarious,” Thompson said. “It combines the conventions of the ‘Law and Order’ series with twisted situations based on children’s stories. Almost every fairy tale character you can think of is represented-Cinderella, the Fairy Godmother, the Three Little Pigs, the Seven Dwarfs, Rumpelstiltskin, the Big Bad Wolf, Pinocchio and many others.”

He added, “The show is full of pop culture jokes that will resonate with the adults in the audience. It is the type of comedy that will be enjoyed by all ages.” In addition to the entertainment factor, Thompson said the show is a learning opportunity for both actors and audiences alike.

“Theater connects children to the importance of reading and teaches skills such as empathy, creative problem solving, critical thinking and teamwork,” he said. “Our actors learn the importance of commitment and motivation, how to work cooperatively with different personality types. They gain confidence, too.”

In today’s digital world, Thompson said, it is even more important to connect with human beings in person rather than just on screens. “Kids watch the actors working together onstage. They see that real people are behind entertainment and realize performers are not just images on TV or computer screens.”

He added, “Theater helps kids develop mentally, socially and emotionally and they have a tremendous amount of fun along the way.”

Tickets for “Law and Order: Fairy Tale Unit” can be purchased at OIonline.com, by calling 304-242-7700 or at the door, if available. The show is part of Oglebay Institute’s Children’s Theatre Season, which is sponsored by the Helen J. Prince Foundation. Other upcoming shows include “The Nutcracker in December and “Rapunzel” in early February.