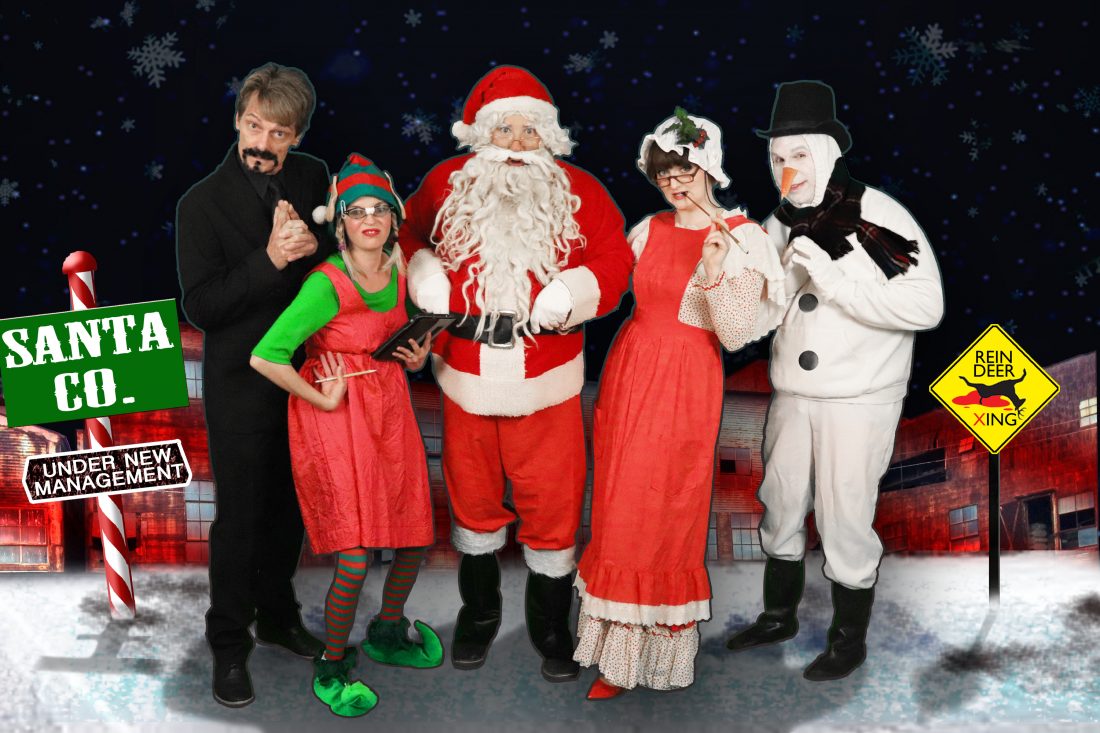 MOUNDSVILLE — You’ll be slashing through the snow as Mystery Theatre Unlimited’s interactive musical comedy murder mystery show, “Slay Ride II: Fright Christmas or It’s a Wonderful Knife” will be presented at 7 p.m. today, Friday, Dec. 6, at the Vue Bar and Grill in Grand Vue Park, Moundsville. The show will also be presented Thursday, Dec. 12, at River City Restaurant in Wheeling.

There is nothing silent about this night as this installment of the original comedy troupe’s holiday “Slay Ride” series finds Santa in double-jeopardy with a hostile take-over brewing, threatening his workshop, and a serial killer is on the loose in the North Pole.

The result is a darkly funny tale of a Santa stalker compounded with a corporate takeover plot. The production is laced with references to horror movies as well as seasonal humor and sprinkled with a few Christmas song send-ups.

The characters include Santa Claus, as played by Dustin Heavilin, and his socialite wife, portrayed by Karissa Martin, who is forever championing causes like “save the Klondike bars.” Santa’s chief elf, Elfish Prezley, played by Erin Huffman, has recently incorporated the toy shop operations and sold shares of the company, SantaCo. But much of the stock has been purchased by a mysterious investor, Cooper Deville, portrayed by Butch Maxwell, who would like to fire Santa Claus and take over the North Pole for himself. Not even Santa’s lawyer, Frosty D. Snowman, played by Pete Fernbaugh, seems able to save Santa from losing everything.

If that situation is not bad enough, a serial killer is on the loose in the North Pole and keeps picking off Santa’s fleet of reindeer, one by one. Before it is all over, Santa faces a deadly duel with Deville, leaving the audience to decide who the serial killer is. A few audience members will also be selected to play small roles in the comedy show, which was written by Maxwell and Bert Furioli.

Mystery Theatre Unlimited is the only professional original comedy theatrical troupe in the upper Ohio Valley, performing in dinner and traditional theatre settings for nearly 25 years.

Including this show, Maxwell and Furioli have written 50 shows for the company, making them the most-produced playwrights in the area.

About a dozen actors comprise the closely-knit ensemble, which is skilled at the in-your-face comedy style that encourages audience members to get involved as they laugh along.

Some audience members will be selected to play small parts in the show, and all audience members will have the opportunity to ask questions and interact with the characters both before the show and during a question and answer period near the end, as well as take a guess at “who done it.”

The Vue is located at 250 Trail Drive in Grand Vue Park, Moundsville.

They Were Lost, Now Are Found