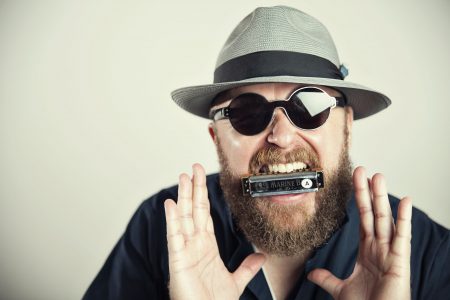 John Nemeth and the Blue Dreamers will take the stage on Sunday, March 1, as BluesDays return to River City in Wheeling.

WHEELING — How many times have you heard people say, “Wheeling? Sure, I’ve passed through there.”

Wheeling certainly is a throughway to many places, and luckily for blues fans, many blues musicians finding themselves on the way from gig to gig love to make a bonus stop in Wheeling for one of Bruce Wheeler’s BluesDays at River City.

And with touring season ramping up, three BluesDays are set for March.

“When the weather starts to break, the acts will tour more,” said Wheeler, producer of BluesDays at River City as well as Heritage Music BluesFest at Wheeling’s HeritagePort.

“All three of the acts have enjoyed playing at River City and BluesFest,” Wheeler added.

Wheeler also is hoping to have the 2020 BluesFest lineup ready to announce at one of the March shows.

∫ John Nemeth: As a Boise, Idaho, teenager in the early ’90s, Nemeth was drawn to the hard-edged hip hop sounds and rock bands of the day — but when a friend exposed him to Buddy Guy and Junior Wells’s classic “Hoodoo Man Blues,” he was hooked. In 2013, he moved to Memphis, Tennessee, where he quickly became a key player in the city’s rich musical scene.

Nemeth had already established himself among the very top ranks of blues musicians and modern soul singers when he decided to break the mold with his record, “Feelin’ Freaky.” Nemeth fearlessly crushes all barriers of style and genre with an album of original songs that defies all the usual pigeonholes. Drawing from his strong influences in blues and R&B, as well as contemporary sounds in hip hop and rock and roll, he creates music that is personal as well as universal, and owes its origin to no one but himself.

Nemeth continues to be one of the hottest stars in the musical firmament, touring nationally and internationally with his Memphis band, taking the world by storm.

∫ Nick Schnebelen: Nick came to widespread attention as a member of Trampled Under Foot, the Kansas City family band that was founded in 2004 and won the 2008 International Blues Challenge in Memphis. He was also singled out for the “Albert King Award” as the best guitarist in the competition.

One of the first things you discover about Schnebelen is his commitment to his music. He does not tippy-toe or wade in; he plunges right into the deep end. Forceful and determined succinctly describe his approach to guitar-playing and singing.

Although Schnebelen has played music from a young age, he blossomed when he attended Kansas City’s Paseo Academy of Performing Arts high school, where he studied both classical and jazz forms. “There are different sets of rules for each and as I played in both the classical orchestra and the jazz band, I got a better understanding of how music works,” he said.

His debut solo album, “Crazy All By Myself,” produced by Tony Braunagel, features songs written with Gary Nicholson, Jeff Paris and Dave Duncan. The CD flexes with styles ranging from slow blues to soul to funk to rock, with even a dash of rockabilly.

“This CD has so many different styles on it,” he said. “But it still works. Most of the songs started in my brain and then were expanded lyrically, but they seem to pair up well here so the varied styles don’t seem out of place. My goal is to continue to write and create new styles for the blues. I want to stand out as an original artist.”

∫ Albert Castiglia: With his latest album released, the aptly named “Masterpiece,” he celebrates an unforeseen triumph — a connection with a daughter he never knew he had. The result is a work that’s both personal and provocative all at the same time.

Castiglia calls this the most meaningful album he’s ever made. “My daughter finding me and opening up my world to an additional family, including two grandchildren, brought out the deepest material I’ve ever created,” he said. “Along with my wife, they were my muses.” Songs such as “Keep On Swinging,” “Masterpiece” and “Bring on the Rain” address the unexpected emotions that infused his psyche with the discovery of a family he never knew.

“Prior to my daughter finding me, my entire adult life felt incomplete,” Castiglia reflects in the song “Bring On the Rain.” “I never knew why I felt that way. I could never put my finger on it. Then when I discovered my daughter, my heart was suddenly overflowing.”

Co-produced by longtime friend and colleague Mike Zito, and released on Zito’s own label, Gulf Coast Records, the album also finds Castiglia reflecting on the disappointment and disconnect that’s gripped the nation in the past several years.

The tone of the album underscores both its mood and its message, from the driving determination of “Catch My Breath,” “Thoughts and Prayers” and “Red Tide Blues,” to the rustic reflection of “Love Will Win the War,” the confidence and contemplation of the title track and the somber and sobering “I Tried To Tell Ya.”