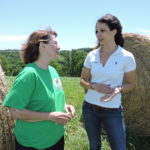 BETHESDA — Belmont County farmers Lova Ebbert and Larry Cain work their fields daily, just as they did before receiving significant checks for Marcellus and Utica shale drilling on their property a few years ago.

These farmers continue growing a variety of crops south of Bethesda, including corn, hay and tomatoes.

“Farming is our livelihood. It’s what we do,” said Ebbert, who serves as co-operator of Ebbert Farm Market in St. Clairsville. “We certainly have not changed our day-to-day lives much.”

Betsy Anderson, organization director for the Ohio Farm Bureau, acknowledged some farmers made adjustments upon receiving significant checks for their oil and natural gas deals.

“Some are installing new fencing, or making barn repairs they have not made before,” Anderson said. “It gives them the ability to do capital improvements, such as applying a new roof.”

Rice officials name their wells after monster trucks, such as “Mohawk Warrior” and “Madusa.” Data from the Ohio Department of Natural Resources showed Rice with eight of the 10 most productive wells in the entire state for the last three months of 2015, with all of these in Belmont County.

Although some would not want well pads on their property, Cain didn’t seem all that concerned about Rice Energy’s plans to place its “Razin’ Kane” and “Crazy Train” well pads on his family’s land — or about the company’s efforts to build pipelines to transport oil and natural gas to market.

“It took up about 22 acres,” Cain said while planting his corn near one of the two well pads. “They have not diminished our farming ability. And we can grow right up to the pad.”

At her farm just down the road, Ebbert tends to her tomato crops without concern about the natural gas wells or pipelines running nearby.

“The pipeline development is not as scary as some believe,” she said. “We sometimes forget they’re even there.”

Unlike Cain, Ebbert does not have any well pads on her property.

“You can specify in your lease that you don’t want a well on your property. Others may be just fine with having a well on their property,” she said.

Cain said when he and neighboring mineral owners signed leases with Rice a few years ago, they did so because they wanted to maintain some influence over how the driller would operate.

“We didn’t sell the minerals. We leased them because we wanted this to be a partnership,” he said.

Kimberly Price, manager of external communications for Rice, said company officials work to address the concerns of those who live and farm near their operations.

“We spent $2.4 million for road repair in Belmont County last year,” she said. “We spent $200,000 between July and September last year for dust suppression.”

“The roads are so much better now,” Ebbert said. “This road (Belmont County Road 92) was in bad shape before Rice came.”

Cain, Ebbert and Price also said allowing a company to install a pipeline does not mean a farmer is forfeiting the ability to use the property. Cain said Rice compensated him for a lost growing season when the firm installed its pipeline in the right-of-way space on his land.

“We can be done with that in a year. Once we are done, the farmer can go back to using the space for growing crops or raising cattle,” Price said. “We are committed to being good neighbors. We’ll be here as long as Belmont County will have us.”