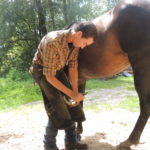 John Marshall High School senior Colt Hummel won’t be moving into a dormitory or choosing a major next year, but the Moundsville teen is still on his way to forging a successful career in animal care.

Hummel, who celebrated his 17th birthday in June, starts each morning at the high school, completing mathematics, English, civics and agriculture courses before leaving for the day around 1 p.m. to work at his personal business.

Hummel lives on a Waynesburg Pike family farm in Marshall County with his parents, Mike and Kim, and brother Chase. The Hummel family has always had an interest in equine, keeping a few show horses at the home throughout Colt’s childhood. When the family’s usual horse farrier was injured last summer, Colt decided to learn the craft himself to keep the farm’s horses healthy and in shape.

A farrier is an expert in hoof care, specializing in trimming and balancing horse hooves as well as replacing shoes if necessary. The job combines the skills of a blacksmith with some aspects of a veterinarian’s position due to a farrier’s extensive knowledge of the anatomy of lower limb issues and diseases facing horses.

To meet his family’s needs and pursue his own business, Colt attended the Oklahoma Horseshoeing School over Christmas break in December. He noted the school was one of few of its kind to allow 16-year-olds to participate at the time. After becoming a certified farrier, Colt started his own business, Hummel Farrier Service LLC, in February and now provides services to four to 10 horses on an average day after school.

He added there is a high demand in the immediate area and across the country for farrier services, although very few people perform the trade in relation to the need. Horses require farrier services every 6-8 weeks, keeping Colt’s business frequent. He also said for several years, farriers were exempt from the draft due to the important nature of their position.

“It’s hard but very rewarding. You work for yourself and you are the business. I can live how ever I want and make as much money as I want to, depending on how much work I take on,” he said. “I’m going to do it until I can’t anymore.”

“I’ve had a passion for horses my whole life,” he said. “I’ve always loved cowboys, so I became one.”

During Tuesday’s Marshall County Board of Education meeting, Colt presented a request for an individual education plan allowing him to adjust his schedule to fit more business ventures into his afternoons, which members unanimously approved.

According to Assistant Superintendent Corey Murphy, the district is committed to providing appropriate alternative avenues for successful students.

“We have policy in the county where students are required to be in high school for four years. However, exceptions can be made with special circumstances where students can better their lives by leaving the classroom. With a student in such good standing, we have the option to look at some out-of-the-box thinking. Although it’s a job, he will also be learning lifelong skills, so it’s really an extension of the classroom,” Murphy said. “When a young man is so goal-driven as he is to turn passion into a successful business, we certainly don’t want to stop him.”

Colt’s mother, Kim, said the trade is a smart alternative to paying for a university without a major in mind. She added Colt has several options to further his farrier career, including becoming a journeyman by receiving additional certifications.

“We don’t want to just send him to school without knowing exactly what he wants to do, and he knows he loves horses. When our farrier was injured, I sent him and had his dad go with him to Oklahoma,” Kim Hummel said. “He might just want to do this for his career, but this way he has something he can do until he figures it all out and has something to keep himself occupied, especially with college being so expensive.”

His father, Mike, said he is very proud of his son for operating an insured business on his own with the help of local attorney, Bob Fitzsimmons.

“We are happy he is so self-sufficient,” Mike Hummel added.