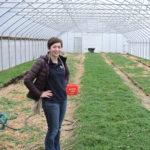 Photo by Alan Olson West Virginia's Promise AmeriCorps VISTA Sam Amberg checks out the winter accommodations of one of the Grow Ohio Valley greenhouses in Wheeling.

WHEELING — A local agricultural group’s efforts to improve food variety in the Ohio Valley have been bolstered with several new additions to its team — more than doubling their numbers and including a new managerial position.

As of mid-January, Grow Ohio Valley’s team includes seven AmeriCorps members, one temporary member, and a new full-time program manager, as well as numerous others staggered throughout the year in addition to seven full-time staff members. Grow Ohio Valley’s executive director, Ken Peralta, said he looks forward to working with AmeriCorps and helping his organization reach its full potential.

Grow Ohio Valley Communications Coordinator Sam Amberg said the AmeriCorps workers have already been hard at work on one of their farming sites off Grandview Street, where they are working to improve drainage on the site, which is the former site of a housing project. Water collects in a small pond, but large piles of gutters and other materials await hands to install them.

“We’ve built two high-tunnel greenhouses last year, but we weren’t able to do much with them due to lack of staffing,” Amberg said. “But with AmeriCorps here, we’ll be using (the greenhouses) to extend the season. We’ll be growing earlier, and also have stuff growing later — and that’s all because we have AmeriCorps here to care for these locations throughout the season.”

Grow Ohio Valley’s aim is to increase access to more nutritious food options in the area. East Wheeling in particular was identified as a “food desert” by the U.S. Department of Agriculture, which is one of the issues Grow Ohio Valley is aiming to eliminate.

“Access is definitely the main mission,”Amberg said. “People are really capable. It’s just if they don’t have access to the right tools, there’s no way they can succeed. … That’s why we’ve created the mobile market, and one of our outreaches is to go around to all the different neighborhoods, where they don’t have a grocery store nearby and they certainly don’t have a farmers’ market.”

Grow Ohio Valley is also involved in the FARMacy program, in partnership with Wheeling Health Right, a farmer’s market which is aimed to increase the availability and access to healthy foods. This program, as well as other outreaches with Grow Ohio Valley, accepts Supplemental Nutrition Assistance Program and Electronic Benefit Transfer cards, and offers food at half the normal price to those using SNAP or EBT benefits.

AmeriCorps is part of the Corporation for National and Community Service, through which more than 75,000 Americans engage in service projects at nonprofits, schools, government agencies and other groups across the country.

Susan Barbour Wood, the program manager hired with the AmeriCorps workers, said she feels the enthusiasm they bring to the area is an enormous asset in helping a community overcome a serious issue.

“I love what Grow Ohio Valley is doing with providing one of the basic needs in life, which is nutrition, to the community,” Barbour said.