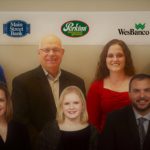 Alyson Hehr and Joelle Connors of Wheeling, and Alex Reneman of Grafton received awards at the Jaycees recent convention held at the EconoLodge and Suites in Triadelphia. The event was sponsored by Main Street Bank, Perkins Restaurant and Bakery and WesBanco.

Hehr spent the first days of her life in the neonatal intensive care unit at West Virginia University Children’s Hospital. And although she has no memory of that experience, the NICU has held a special place in her heart ever since.

In 2009, at the age of 14, using the money she received after winning an award for volunteer service, she founded Alyson’s Angels, a nonprofit organization that provides assistance to the families of babies in the NICU in Morgantown. Since its inception, nearly 1,000 care packages consisting of gas cards, gift cards, toiletries and snacks have been delivered providing a small measure of comfort in an otherwise stressful situation.

Hehr continues to be a vital part of the daily operation of the charity and helps raise thousands of dollars each year through fundraisers and developing external partnerships with community groups.

A student leader at Shepherd University, she is pursuing a double major in economics and political science. Currently in her final semester, her capstone project will examine the effect of microfinance organizations on the empowerment of women in developing countries. Upon earning her degree, she plans to attend graduate school and study humanitarian law and international relations.

She serves as the first president of Catholic Campus Ministries and is a founding member of Phi Beta Delta, an honor society dedicated to recognizing scholarly achievement in international studies.

She has volunteered for Catholic Charities in the area of immigration law, assisting with citizenship and refugee casework and coordinated a campus event that raised several thousand dollars for Syrian refugees.

Hehr is also a member of an award-winning Model United Nations team and was selected as a collegiate delegate to the Presidential Inauguration Leadership Summit, a highly-competitive program specifically designed to empower next generation leaders.

Connors is an evangelist, not for a religion but for the city, region and state that she calls home.

At just 18 years of age, she chaired her first fundraiser in response to a devastating flood that ravaged the tiny town where she grew up. Within days of the tragedy, thousands of dollars were raised and lives were changed for the better.

As the marketing director for the City of Wheeling, she took on the daunting task of promoting a city who many believed was near death.

Connors knew that in order for Wheeling to market itself as a trendy, modern city on the verge of a renaissance, it must give people a reason to experience all that it had to offer and begin the process of changing hearts and minds.

She founded or co-founded several initiatives designed to breathe new life into the city, providing new and innovative ideas for business, preservation and cultural enhancement.

She spearheaded the First Fridays program, which has brought tens of thousands of people to the downtown to support local business.

She co-founded the Wheeling Wine and Jazz Festival, an annual event that has raised thousands of dollars for downtown reinvestment and quickly became one of the premier summer events in the area.

Connors also helped create Reinvent Wheeling, a partnership that brought together many of the area’s businesses, community groups, universities and cultural institutions, in order to create initiatives and events that spur social engagement and economic activity.

She was also instrumental in the expansion of the Wheeling Heritage biking and walking trail, by authoring over $2.5 million in successful grants for the project.

Connors currently works as an external relations manager for American Electric Power and formerly served as a business development specialist in Ohio, Marshall and Wetzel counties for the Regional Economic Development Partnership.

Reneman started his first business as a teenager.

After multiple successful ventures including a lawn care company, a restaurant and computer repair service–at 26–this veteran of Operation Iraqi Freedom founded Mountain Leverage, a strategically focused business in the niche market of voice-enabled technology.

The start-up quickly gained the attention of Pittsburgh-based Vocollect Voice, and Mountain Leverage became a key partner. Over a decade later, Mountain Leverage, based in the small West Virginia town of Grafton, is recognized as the global leader in Vocollect Voice integrations and is the No. 1 voice automation partner in the world, powering global brands such as Volkswagen, Nike, eBay and Aveda.