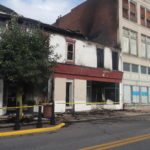 Although two local business owners had planned to demolish an aging building they had recently purchased on Jefferson Avenue, a sudden fire Monday night may have accelerated the process.

After the fire destroyed the two storefronts and damaged two others across the street, community members are recovering and preparing for the future.

According to Moundsville Fire Chief Noel Clarke, the police department received a call from the sheriff’s department at 11:12 p.m. Monday regarding a fire at the former Ken Blake Photography and the adjoining Discovery Thrift Shop on Jefferson Avenue. Clarke said the cause of the fire is undetermined and the building is a total loss.

Clarke added determining a cause will be difficult due to the unsafe conditions of the building.

Peggy’s Flower Shop owner Edye Thomas had just purchased the property two weeks ago with her brother, Gerald Heller, with plans to demolish the two businesses. She said she and her brother are consulting with their insurance company and city officials to plan their next moves.

Discovery Thrift Shop was already expected to vacate in October to begin the process.

“We just purchased this building with a three-phase project right in mind. The first phase was acquiring the property. The second phase is turning the back into a level parking lot with a fence around it. The third phase was to tear these buildings down because they weren’t safe,” Thomas said. “The reason we purchased them was because of squatting and the deterioration of the property and we have a lifetime investment here at the flower shop, so this is really unfortunate for us.”

City Manager Deanna Hess said she and a building inspector will be assisting Thomas and Heller with demolition planning, but it will be the responsibility of the business owners and not the city. She added the incident should be a reminder for business owners to keep storefronts secure, especially at night.

“You want to make sure everything is secure each night, just like you would for your own home,” Hess said. “We feel for owners and hate to see this happen. We can work together on this.”

Two organizations across the street, Helping Heroes and Court Appointed Special Advocates for Children, also experienced smoke damage to their siding and ceiling during the fire. The building next door, which houses Dragonfly Crafts & Gifts, sustained water damage to the basement, although the business on the main floor was not damaged.

Dragonfly Crafts & Gifts owner Sheila Powell said she did notice some smoke around her business, but neither her space or merchandise were damaged. She said the fire has made Jefferson Avenue business owners more aware of the area’s susceptibility to fires, due to the age of most of the buildings in the area.

“It bothered me to be helpless. You have to watch it and you can’t do anything,” Powell said. “My heart goes out to (the business owners), because we’re so close. All of these buildings are so old and connected, so fire is always a big concern. Things just flood through your head when something like this happens. I have insurance, but my crafters have to cover their own items and that had me scared.”