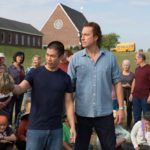 Photo Provided Wheeling native John Corbett, right, plays the lead role in a new feature film, “All Saints,” opening nationwide on Friday. In this movie based on a real-life story, he portrays an Episcopal priest who allowed refugees from Myanmar to farm the land of a Tennessee church that had only a dozen members.

Wheeling native John Corbett has intervened to ensure his new film, “All Saints,” opens in his hometown Friday, and he urged area fans to attend a screening this weekend.

“All Saints,” based on a true story, is set to open in 1,000 theaters nationwide on Friday. That number has grown to include Marquee Cinemas at The Highlands, thanks to the actor’s plea to Sony Pictures, distributor of the movie.

The post-production drama began when his Wheeling buddy, Greg George, made plans for 20-30 friends to go to dinner and see the movie, then learned that area theaters weren’t showing it. Corbett said he called Sony Pictures and told officials, “This is a big deal for us. It’s my hometown.”

The actor said, “It’s my first lead in a feature film. … I’ve always been supporting. After all these years, it’s the first time, at my age. It’s an exciting time for me.”

Corbett portrays the Rev. Michael Spurlock, a former salesman who went to seminary and became an Episcopal priest. Spurlock’s first assignment after ordination was to close the tiny, struggling All Saints Episcopal Church in Smyrna, Tenn. Those plans were altered when a group of Karen refugees from Myanmar arrived at the church.

Corbett said, “I’ve seen the movie four times and I really enjoy the movie. I’m not trying to sell anybody anything in Wheeling. I think they’re going to enjoy this movie and get something out of it. It’s a small town that comes together to help each other. That’s what it felt like when I was growing up in Wheeling.”

Corbett came to the film project by an unusual route. His longtime accountant asked him to read a script written by another longtime client. The actor agreed reluctantly, but became intrigued by the possibilities.

He said, “Ten or 15 pages into it, my wheels start spinning. It’s a true story. This would be interesting for me to play.”

Screenwriter Steve Armour secured funding quickly and production began within four months. Corbett said, “We started shooting it in Nashville and at the real church, with all the real congregation that participated in the real story.”

The refugees stayed at a camp in Thailand before being relocated to Smyrna. The actor said, “They’re Christians. They show up at his (Spurlock’s) door. They don’t speak English. They don’t know how to work a gas oven. They’ve been placed in low-income housing.”

The priest goes against conventional wisdom and accepts the people. While walking in the fields one day, “he’s thinking how to please all these people, and God speaks to him,” Corbett said.

Corbett was able to spend a little time with Spurlock before shooting the pivotal scene. The priest told him, “Man, I was just out here taking a walk. I heard this voice, a voice I didn’t know, a man’s voice, in my head. It said to me, “I’ve given you these farmers. You have all this land. Get to work.'”

Spurlock allows the refugees to farm the church’s land. Hinting that the real-life saga takes “a nice twist,” Corbett said, “Something else happens that’s just as beautiful.”

After leaving All Saints, Spurlock joined the staff of St. Thomas Church in New York City, where he now serves as associate for pastoral care. Corbett got to spend more time with Spurlock at a screening for the church congregation in Smyrna three weeks ago.

The former refugees remain in Smyrna. The actor said, “They’re all there and their kids are there. They were more than happy to be part of it. They were our whole background for the movie.”

The film does not have special effects or car chases, its star noted. Comparing it to one of his favorite movies, “Tender Mercies,” Corbett said the new film offers “a small, intimate look at people.”

While “All Saints” contains elements of faith, he said, “We didn’t want to make a ‘faith-based movie’ on some levels. We just wanted to make a good movie. It’s a straight-ahead drama without any visits from Jesus, which is not a bad thing. We do have to have that scene where God speaks to Michael. What we do, we came up with a great way to handle that. You don’t even know it’s happening until the next scene when I say God spoke to me.”

As a film-goer, Corbett said, “I don’t like to be told and propelled to feel a certain way. I like to watch the movie and find out things for myself.”