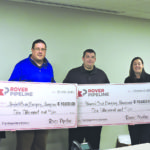 Rover representative Alexis Daniel presented Marshall County Office of Emergency Management director Tom Hart, as well as Hancock County OEM director Jeremy Oberman, with checks at the Marshall County Public Safety Building, saying that she hopes the counties will put the money to good use in whatever capacity they deem necessary.

“The donations are meant to assist the first responders programs. We’ve heard everything from new systems, to uniforms, to new emergency office equipment, to utility vehicles,” Daniel said. “Every county aligns their budgets differently, so we’re working with them to see what their needs might be.”

Tom Hart said the OEM was currently brainstorming ideas on what the donation would go toward.

“Right now, we’ve got a couple different ideas as to how we’ll use the donated money, but actually we’ll probably sit down and go through some different things to see what the needs are,” Hart said.

Oberman echoed the sentiment, though declined to comment further. Daniel and her associates also traveled to Wetzel County earlier that morning to present the same checks to agencies in Tyler, Wetzel and Doddridge counties.

Daniel said the donation was part of a larger outreach to help assist the communities the pipeline would be operating in, which runs through Pennsylvania, West Virginia, Ohio and Michigan.

“We’re here to honor the commitment to be good community leaders, and to work with the first responders and EMAs along the route,” Daniel said. “The industry and communities at large need (first responders). We like to work with them on an ongoing basis, we’ve met with them before construction started and now we’re starting to meet with them again now that everything’s starting to become operational, just to make sure everyone is prepared and if there is something they need to respond to. We work with them on planning projects, and for a variety of different projects.”

Hart said Rover, as well as other industry representatives, have done well at building up a rapport with the county’s first responders.

“Over the past eight or nine years, we’ve been able to build a relationship with the various companies that have been coming into Marshall County,” he added. “We appreciate the fact that they’re reaching out to us and are willing to work with the first responders agencies and public officials, with regards to what they’re doing and what they’re trying to achieve, but also in making safety their primary goal. We’re working together to achieve those goals, and make sure everyone’s on the same page.”

The Rover Pipeline is a 3.2 billion cubic foot pipeline which will transport natural gas through the area, utilizing gas found in the Marcellus and Utica shale formations. It extends 713 miles along its route.