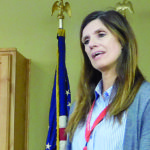 Photo by Robert A. DeFrank XTO Energy spokeswoman Karen Matusic gives an update to the Belmont County Board of Commissioners in the aftermath of a well pad explosion at Powhatan Point in February.

The Belmont County Board of Commissioners gave an update on the state of the county in the recent emergency flooding and well pad explosion response at Powhatan Point during the Wednesday meeting.

“You’ve had two major issues going on at the same time. You’ve handled them well,” Commissioner Mark Thomas said. “We have an army of great volunteers who jump in.”

Commissioners J.P. Dutton and Josh Meyer seconded these commendations for the responders, as well as the response from XTO Energy.

XTO spokeswoman Karen Matusic said her company deeply regretted the evacuation that has required some residents to be outside of their homes since the time of the accident, which resulted in the evacuation of 30 homes in a mile radius of the site. More recently, the outer half-mile has been cleared for individuals to return, but some have elected to remain out of their homes until the well pad is capped. Four homes remain evacuated inside the inner half-mile.

“We have been overwhelmed with the warm welcome. The understanding of the people,” Matusic said, thanking the residents for their patience.

She added that access roads to the pad have been reinforced and a bridge that was delivered over the weekend is now fully assembled and ready to be installed over Cats Run Creek to create an additional entrance and exit from the pad site to enhance safety for onsite workers.

In addition, a significant amount of damaged and unused equipment has been removed from the pad.

A portion of the crane that was laying on the adjacent wellhead has been removed from that wellhead, with plans to remove the entire crane from the pad. Matusic said no gas has escaped from the second well and that it has been secured.

“We need to get big equipment in and out of the area,” she said.

Matusic added that fracking and drilling were not ongoing when the accident occurred.

“We were preparing the well to be brought on to production when the explosion happened,” she said. “There was a producing well, a big Utica well, and two smaller wells. Immediately the shut-off valve went on those…but when the crane fell, it fell on one of those wells. That’s what we’re doing now, removing that.”

She added that the well has been reinforced so that nothing leaks.

Any local residents who may have been impacted by this incident are encouraged to call XTO’s claims phone number at 855-351-6573 or visit XTO’s community response command center at the Powhatan Point Volunteer Fire Department, located at 104 Mellott St. 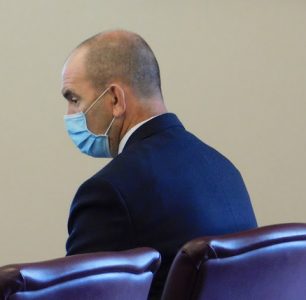 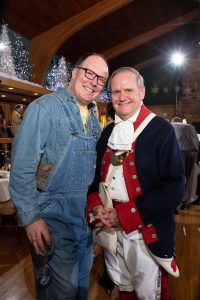