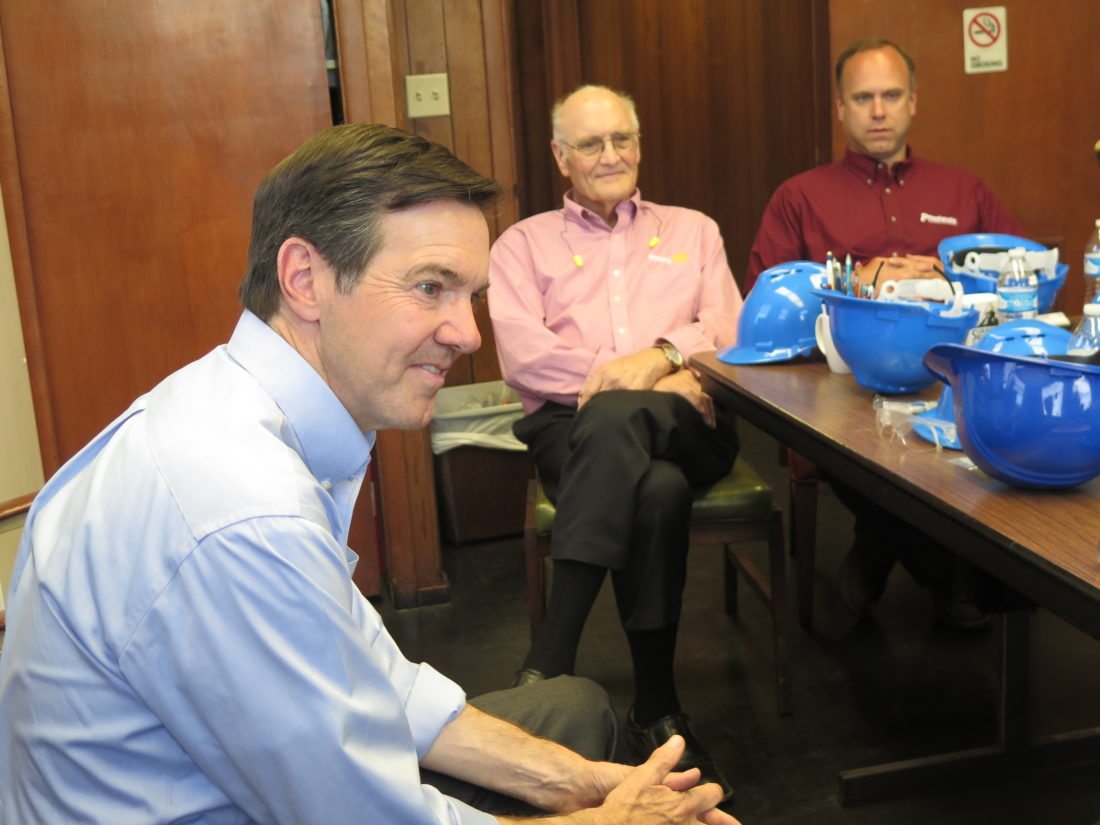 Representatives from local businesses told U.S. Rep. Evan Jenkins on Wednesday they are more optimistic about their futures today following the passage of Trump cuts for small businesses last year.

Jenkins, a GOP candidate for U.S. Senate, toured Warwood Tool, then sat down there for a roundtable discussion with local businessmen to gain their thoughts on how they might benefit from the 20 percent tax break for small business passed by Congress. Jenkins was among House members voting in favor of the tax cuts.

Those participating in the roundtable included Logan Hartle and Phillip Carl, of Warwood Tool; Scott Trimmer, operations manager for Eagle Manufacturing, in Wellsburg; and Bob Contraguerro Jr., of Panhandle Cleaning and Restoration, Wheeling.

Trimmer said Eagle went from “having no optimism” about the business climate last November to planning to hire at least six additional employees and buying newer equipment.

The company traditionally has sought to buy used equipment at low prices when replacement of machinery was necessary, according to Trimmer.

“Because of that tax break, we can invest and buy our next machines,” he said. “My department is now looking to buy a $2 million machine, rather than a 1990 classic. It will pay for itself in a short matter of time.”

Trimmer said the company is about to sign some government contracts that will put Eagle cabinets and metal products on the next generation of U.S. Naval destroyers.

This could result in as many as 25 jobs being created, he said.

Many of those being hired by local companies are younger people, the businessman acknowledged.

Jenkins noticed bicycles parked in Hartle’s and Carl’s offices at Warwood Tool, which sits along Wheeling’s bike path at the end of 19th Street in Warwood. He said they have a lot of youthful energy despite being located in an older facility with older equipment.

“It’s old, and we’re keeping it running,” said Hartle. “There is newer equipment that could help us.”

Carl said while the tax cuts might not provide Warwood Tool enough extra revenue to invest in newer equipment, the tax cuts have given the company and its customers enough optimism for the future that Warwood Tool is developing a new line of products.

While Panhandle often is called upon for clean up services after national disasters, Contraguerro told Jenkins the company relies on its day-to-day operations. Their employees, trucks and equipment are called to local homes and businesses each day following water-line breaks or other incidents, and Panhandle doesn’t wait for hurricanes to hit, he said.

The company plans to invest the money it receives from the tax cuts into more trucks and equipment.

“We will be reinvesting in the business,” he told Jenkins. “There is a huge benefit to reinvesting.”