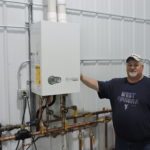 Several months of work have paid off as Marshall County and Moundsville officials gathered Monday to commemorate the completion of a new garage for the city’s street department.

Employees from Quality Construction have been working since February. They quickly erected the building frame during the first week before working through wintery conditions late into April to finish the garage meant for the city’s garbage trucks and other heavy equipment.

Moundsville Public Works Director Frank Stocklask said the new building will make maintenance on the city’s equipment much easier, particularly during winter months, thanks to drains set into the floor that are hooked up to the property’s wash station.

“In the wintertime, when (the trucks) got salt on them, they can wash them so it’s not eating at them,” said Stocklask. “These drains are all tied into the wash station we got through the DEP. … They can get the dirt, crud and salt off of them.

“What people don’t realize is the garbage trucks, when they’re empty, they don’t just drive around. Sometimes if they’re empty, a bulldozer pulls them into where they’re at, and pulls them back off the main roads. There’s dirt, mud and slop on them, and need to be cleaned up every day.”

The garage includes space for the city’s fleet of four garbage trucks and two rooms for employees. Stocklask said the department was considering installing an island in one of the rooms with some barstools to serve as a lounge and break room.

The building was completed on time and within the $319,541 budget, which comes after Stocklask approached the city seeking additional funding to install heated floors for more effective heating.