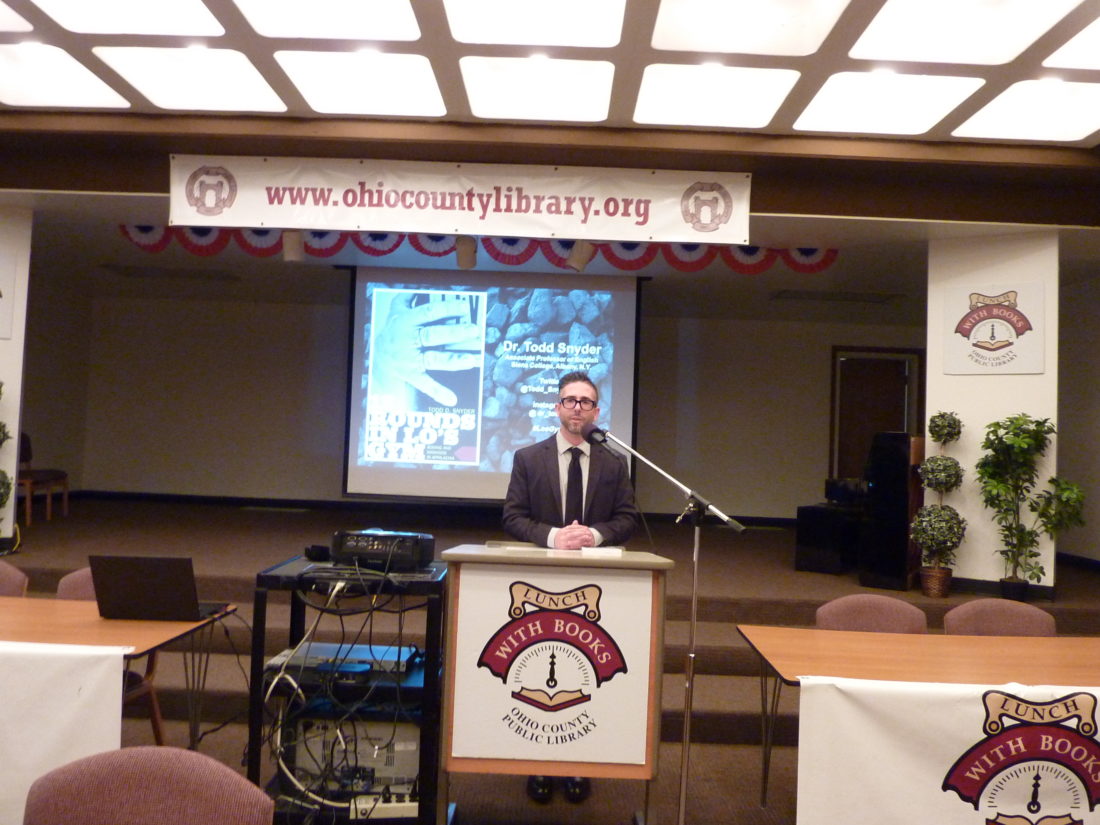 Snyder, who grew up in Cowen in Webster County, spoke at Lunch With Books at the Ohio County Public Library on Tuesday. Now a professor of rhetoric and writing at Siena College in Albany, New York, he enthused, “It’s so good to be back in West Virginia.”

He and his wife, who teaches at the State University of New York-Albany, are graduates of Marshall University. He loves West Virginia so much that they named their son Huntington.

Snyder’s book, which was published on March 1, tells the story of his father, Mike “Lo” Snyder, a fifth-generation West Virginia coal miner who operated a boxing gym for local youth.

“This book is special to me because without my mother’s and father’s support, I wouldn’t be where I am today,” he said.

The author thinks Appalachia is portrayed unfairly in the media. West Virginians are hard workers, resilient and adaptable, and have a strong sense of community, he observed.

While he enjoys living in New York, he said, “The obligation to take care of people is stronger here (in West Virginia) … That sense of a tight-knit community, I miss sometimes.”

Recalling the book’s origins, Snyder said he wrote 12 pages of short stories while working on his doctorate at Ohio University, but put the work aside for a few years. After starting his first job at Siena in 2011, he shared stories about his father with a colleague who encouraged him to write a book.

Becoming a father also inspired him to write “12 Rounds in Lo’s Gym.” He explained, “When I found out I was going to be a dad, it made me want to tell the story of my dad … My son lives in Albany. He doesn’t know the world I come from … He is able to read about his Appalachian roots. I want him to be a hard worker, like West Virginians.”

Snyder, who is 36, said he decided to try boxing at age 17, after attending a Toughman contest in Beckley. His father, a former boxer, set up a makeshift boxing ring in a back room at his wife’s beauty shop and trained his son.

However, Snyder lost his first — and only — fight at Simon’s Gym in Morgantown. Evoking the memory of another West Virginian’s famous character, he described the scenario: “I was Don Knotts in boxing gloves — a young Barney Fife in satin trunks, all knees and elbows.”

Snyder added, “I never had a next fight. I went to college.”

After a Baptist church bought an old bar and turned it into an outreach community center, Snyder’s father was invited to open a boxing gym there. His father also bought 800 coats a year for students in Webster County public schools and presented programs at retirement homes. “It became a community service outreach,” Snyder said.

“We both found our way. What a lucky punch,” he remarked, recalling the legacy of his brief boxing stint.

Later, after the coal mine closed, Snyder’s father sold his house, closed the gym and moved. The author said, “The gym’s not around, but it’s around in spirit, through the book.”

Asked about the controversial 2016 memoir, “Hillbilly Elegy,” Snyder said the issue of Appalachian poverty is “way more complicated” than writer J.D. Vance suggests. “Our people are better than that; I think it’s unfair,” he said of Vance’s portrayal.