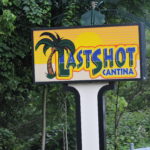 Photo by Alan Olson The Last Shot Cantina on National Road was the site of an attempted robbery Tuesday morning.

Ohio County Sheriff’s deputies are searching for the man accused of attempting to rob a Triadelphia bar in the late night hours Tuesday morning after after the bartender tried to dissuade the robber by pulling a gun of his own.

According to Ohio County Sheriff Tom Howard, police were working through Wednesday to obtain surveillance footage of the incident, which occurred around 1:30 a.m. Tuesday at the First and Last Shot Cantina, on National Road in Triadelphia.

Howard said the man allegedly drew a gun at the door to the bar, only to take off running when the employee drew his own weapon.

“The guy showed up at the door, brandished a weapon, and the employee brandished his weapon back,” Howard said. “The guy took off running. We got the dogs on him, they tracked him, and they found his car over by Wanda’s (Bargain Barn), and he got in his car and took off.”

Howard said footage would be pulled sometime Wednesday. After it was analyzed, the sheriff’s office would release information in an attempt to identify the man.

Howard said he is a proud supporter of the second amendment right to defend oneself. He said whether employees should be allowed to carry weapons on the job should be up to individual businesses.

“I’m very pro-right-to-carry, but that’s up to the individual business as to let them carry like that,” he said.

A representative from The Last Shot declined to comment on the matter Wednesday morning other than to say it had been business as usual since the attempted robbery.